Triceratops Held Out to the Bitter End 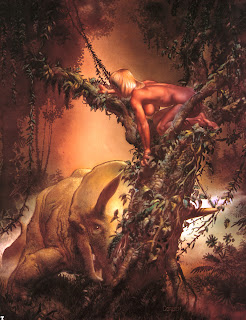 
A horn from one of the last surviving dinosaurs could finally prove that a massive meteor strike ended the reptiles' reign on Earth. The 45cm-long fossilised browhorn belonged to a family of plant-eating dinosaurs that included the famous three-horned Triceratops.

It was found at a geological site known as the Hell Creek Formation in the bleak badlands of south-east Montana, U.S., where many other dinosaur fossils have been unearthed.

What made this find so remarkable was its location, just 13cm below the rock layer that marks the Cretaceous-Tertiary or 'K-T' boundary - the point in the fossil record where the dinosaurs died. This suggests dinosaurs were around right up to the time all traces of their existence vanished.

Scientist believe they then disappeared suddenly after an abrupt global disaster rather than a slow extinction... 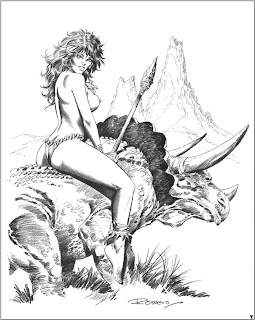 Triceratops is one of the dinosaurs that has recently come under scrutiny by taxonomic lumpers, who strongly suspect that juvenile and adult forms of the same dinosaurs have been misidentified as separate genera, with juveniles being labeled Triceratops and adults, who appear to have had a large frilled ridge rather than horn, identified as Torosaurus.

It's doubtful that Cave girls rode Triceratops, or even Torosaurus, for that matter.  Call it artistic license.
Posted by Fritz at 6:00 AM