A Craze for Pooches in Iran Dogs the Morality Police


Iranians have turned to the Internet to organize antigovernment protests. Now they're flocking online to defy another Islamic Republic edict: buying and selling dogs.


A trainer and puppy outside the kennel of Woof Woof Iran in Karaj, Iran.

Buying and selling dogs is illegal in Iran, unless they are guard dogs or used by police. Dogs are considered "haram," or unclean, in Islam. Until recently, keeping dogs as pets was limited to a small circle of Westernized Iranians.

But access to satellite television—and American programs depicting families playing with pups—has turned dog ownership into a sign of social status in Iran. 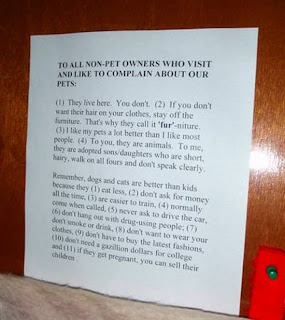 I'm curious as to the origin of the Muslim beliefs regarding dogs. Oh yes, dogs are unclean.  They'll eat all kinds of things that you and I wouldn't (old dry fish on the beach is just the beginning), but no more so than most scavenger animals.  And they never take a bath voluntarily, even after swimming in the foulest water.  And mine sheds constantly...

Did somebody sic a big dog on the Prophet at some point, and he developed a phobia?  Certainly, the Muslim prohibition on dogs has been honored often in the breech.  Several breeds of dogs are known or thought to have descended from dogs of the ancient Egyptians, including the Saluki, thought to have been a gift from Allah.  The Afghan Hound, hails from, wait for this, Afghanistan, home of the Taliban.  But I guess the royalty that can afford such hunting dogs always exempt themselves from the rules forbidding them.

Original article found at Althouse.
Posted by Fritz at 8:56 PM

Email ThisBlogThis!Share to TwitterShare to FacebookShare to Pinterest
Labels: dogs