The Jig is Up Girls, We Know You Look Too 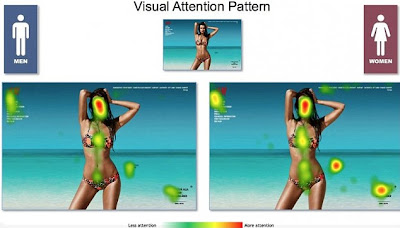 Hot spots: The colour splashes shows where men, left, and women tend to look at the same bikini ad. Red indicates which part of the poster generates most interest and green the least. In this instance, attention ti the face is evenly matched between the genders. But women are much more interested in the model's toned stomach and the price of the bikini. Men to prefer to focus squarely on her breasts and crotch - rather than her surrounding physique

The article makes a big point about how men and women see things differently, but when I look at this, I see that they look pretty much the same.  Sure, there's a change in emphasis, but men and women look pretty much the same places, and women seem to stare a little longer.  It's a bikini ad, so you would not expect men to care much about the text or the cost, unless they're gay.  Surprisingly, I guess, both sexes looked at the face the most.  Looking at the order, most often, women looked at the boobs first, and the face second, men the reverse.  Even men usually looked at the description before the crotch (maybe they were gay). In a test with a naked woman and shoes, men failed to exhibit any interest in the shoes... I'm shocked, shocked.  Again, it's an ad for women's shoes, why would a man care: Time for a quiz: 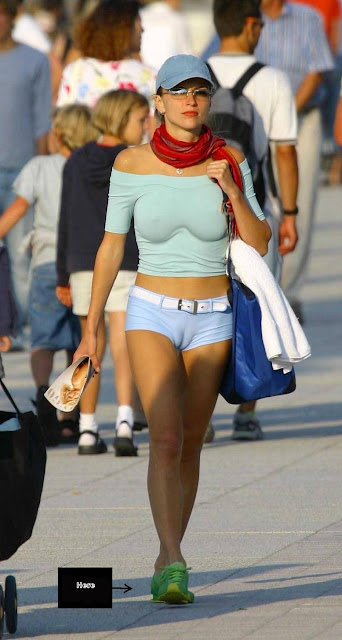 OK, be honest, where did you look first?
Posted by Fritz at 6:00 AM