It's a Eurasian Thing, You Wouldn't Understand


ScienceDaily (July 18, 2011) — Some of the human X chromosome originates from Neanderthals and is found exclusively in people outside Africa, according to an international team of researchers led by Damian Labuda of the Department of Pediatrics at the University of Montreal and the CHU Sainte-Justine Research Center. The research was published in the July issue of Molecular Biology and Evolution.

Earlier, the researchers found a cluster of genes on the X chromosome that seemed to have arisen elsewhere than others.  When a gene map of Neandertals became available, it matched a sequence.  It was present in modern humans all over the world, with the exception of Africa, suggesting that it was arose or was transferred to modern humans after their forebearers left Africa.


"There is little doubt that this haplotype is present because of mating with our ancestors and Neanderthals. This is a very nice result, and further analysis may help determine more details," says Dr. Nick Patterson, of the Broad Institute of MIT and Harvard University, a major researcher in human ancestry who was not involved in this study. 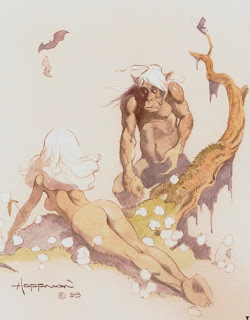 And here to illustrate the interbreeding of modern human and Neandertal, is your prototypical fair haired Cave Girl, making googly eyes at a rather sickly Neanderthal.  Actually, I rather suspect he was not meant to be a Neandertal at all, but rather some other proto-human race.

Of course, if he were truly Neandertal, he would likely have fiery red hair.  And the fact that gingers are likely descended from Neandertals would also explain their lack of souls, and bad tempers...
Posted by Fritz at 8:08 PM