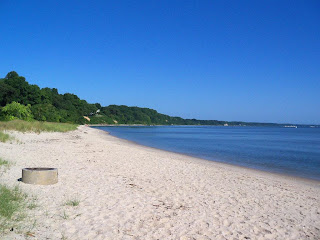 Almost too good to be true for mid-July.  The sky was cloudless, temperatures were in the mid-70's, just a touch of breeze. 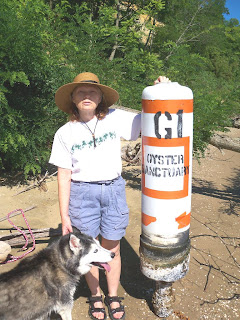 Georgia and I found this renegade marker for an oyster sanctuary way up the beach in the brush.  We left it standing, so if someone who wants it sees it from the water they can come and get it (but watch the sand bar, it's really shallow there). 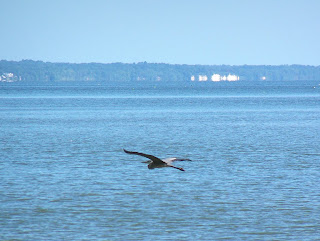 A GBH (Great Blue Heron) took exception to our walking past his fishing perch on a groin.  I was lucky enough to get the camera to focus in time... 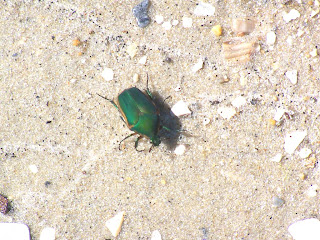 Some sort of large, shiny green beetle enjoying the sun and sand. 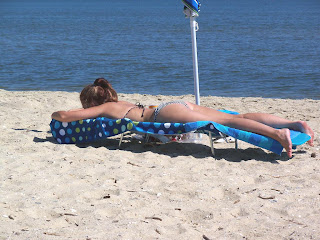 Some sort of human doing likewise. 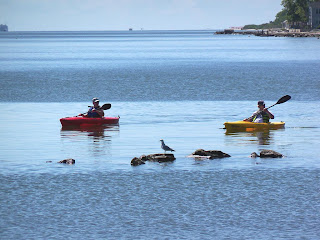 Kayakers approaching the South Jetty.  The South Jetty of Flag Harbor is quite low in the water after years of subsidence.  We had the North Jetty rebuilt a few years ago (as a member of Flag Harbor Marina, I got to contribute), but the south side has continued to get lower.  It's quite easy for an ignorant boater to try to take a boat across it at the end, but that can be a costly and unpleasant mistake. 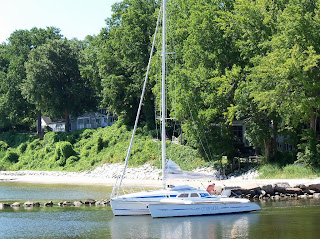 One of the more interesting sailboats in the harbor.  It is a trimaran for which the two outer hulls can be moved close to the hull for easily docking, but wind out, and lock for stability when sailing. I guess Odonata is the name, and not the brand.  It appears to be named after Dragon Flies.
Posted by Fritz at 11:53 AM