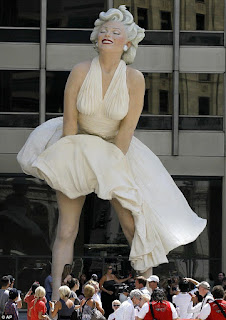 Work of art or a pervert's paradise? Risqué 26ft statue of Marilyn Monroe is unveiled in the Windy City


...A 26-foot tall statue of Marilyn Monroe towering above tourists in the middle of Chicago was unveiled on Friday to much applause.

Bemused shoppers stopped and stared, a boy tried to crawl up her leg and the men from a wedding party could not resist taking a few photos from all angles...

The artist who did this, J. Seward Johnson, Jr., is also the main benefactor of the place where I did my post-doc in Florida, Harbor Branch Institution, (now Harbor Branch Oceanographic Institute).  There were a few of J. Seward's lifelike statues planted around the grounds, although they were bronze, and not realistically painted.  Incidentally, Johnson's fortune did not come from selling statues, but rather he also inherited control of the Johnson & Johnson health care products.  His father, Seward Sr. as he was called, actually founded Harbor Branch, with Ed Link, who invented the Link trainer, the first flight simulator and trainer. 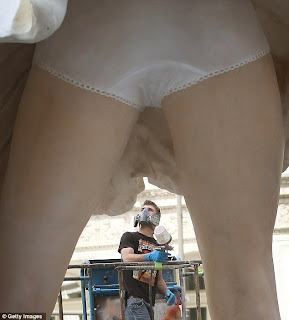 Marilyn, as you are probably aware, was a blond bombshell movie star of the late '40s through the early '60s.  Born Norma Jean Baker in 1926, she went from modeling to Hollywood and stardom.  She was the first Playboy Playmate of the month in Dec. 1953, when Playboy purchased the rights to a photo shot from a time before her stardom. The pose celebrated in the statue above is from the movie, "The Seven Year Itch".  The scene reputedly caused a great deal of trouble between her and then husband Joe DiMaggio of the New York Yankees fame.  After her divorce from Jolting Joe, she married playwright, Arthur Miller.  They were divorced in 1961, shortly before her death in 1962.  She was apparently suffering from psychological problems at the time, and had checked herself into a psychiatric  She was also reputedly having affairs with one or more the the Kennedy brothers (Jack and Robert; Teddy was too young and dorky), leading to conspiracy theories concerning her death of multiple drug overdose in Aug of 1962.
Posted by Fritz at 4:06 PM