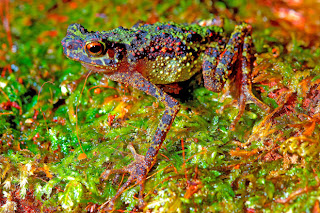 Did you even know there had been a Rainbow Toad?  I didn't.


Herpetologists at Conservation International have rediscovered the exotic Sambas stream toad (aka Borneo rainbow toad, aka Ansonia latidisca) after 87 years of evasion, and released the first ever photographs of the brightly colored amphibian.

The spindly-legged species was last seen in 1924 and European explorers in Borneo only made monochrome illustrations of it. A decade or so later, the CI and the SSC Amphibian Specialist Group added the species to its World’s Top 10 Most Wanted Lost Frogs campaign.

That's one cool looking toad.  Expect a run of people to go try to capture some and start breeding them in captivity for the exotic pet trade.
Posted by Fritz at 10:30 PM