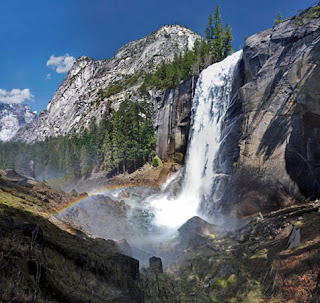 Waterfall Victims Hugged Tightly as They Went Over Edge


Park officials at Yosemite National Park said search-and-rescue crews were continuing their search for three people presumed dead after witnesses said they fell from Vernal Fall on Tuesday afternoon. Witnesses said two of the victims were holding on to each other in a bear-like hug as they went over the edge. They describe "watching in horror" as the group fell to their death.

Park officials identified the three as Hormiz David, a 22-year-old Modesto man; Ninos Yacoub, a 27-year-old Turlock man; and Ramina Badal, a 21-year-old Modesto woman. The group came to the park for a day trip with a group of family and friends.

The group was seen entering the water above Vernal Fall, approximately 25 feet from the precipice, according to Yosemite. The drop is 317 feet at the waterfall's edge...

...The waterfalls at Yosemite are extremely strong this summer because of heavy snow pack. At least eight people have died in the park this year and many have been linked to the spectacular runoff and dangerous conditions.

And how many people have died in the U.S. as a result of Nuclear Power?
Posted by Fritz at 5:00 AM

Email ThisBlogThis!Share to TwitterShare to FacebookShare to Pinterest
Labels: rants