The March of the Snakeheads Continues

Late last week, a Northern Snakehead was caught by a Smithsonian Institution team seining in the Rhode River.  The adult female was 23 inches long and was captured "near the head waters of the Rhode River" which I presume to be near Muddy Creek, there being no real river entering the West River. 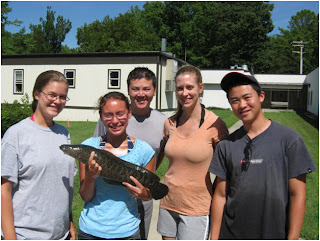 The Rhode River is the location of the Smithsonian Environmental Research Center, on the outskirts of Edgewater, Maryland.  It was captured by a team of scientists from the Marine Invasions Laboratory, which, appropriately enough studies the transfer of marine organism from their native to foreign environments via a number of pathways.  The group (shown at the right) included two full time SERC scientists and three summer interns.

With the appearance of the snakehead this far down from it's closest known occurrence, in the Northeast River, we can be fairly sure that Snakeheads have at least had a chance to colonize all the low salinity tributaries in between, and will likely start showing up in greater numbers in upcoming years.  With a snakehead having been killed near Pt. Lookout as well, it seems likely that snakeheads will also have a good chance of colonizing any low salinity tributaries on the Maryland's Western Shore, and I see no barrier to them colonizing the Eastern Shore tributaries as well. 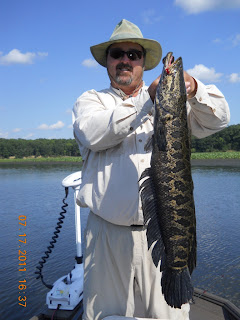 At this point, it would seem the best we can hope for is that the snakehead will fit into the system without displacing any native fish.  So far, results from the Potomac River, where the snakehead invasion got an early start, seems promising.  Snakeheads have been caught in decent numbers in several of the tributaries there without, at least so far, displacing any natives.  The one fish that the snakehead most resembles in shape and habit is the Bowfin (sometimes called a grindel or blackfish). Not a particularly common catch, it is considered a gamefish, but not a particularly fine food fish.  Snakeheads are reputedly very fine eating fish.

I would be remiss in a post on snakeheads if I did not post a picture of Capt. Mike Starrett's giant that he caught just this weekend in Mattawoman Creek, off the Potomac River, south of Washington D.C.  At 30 inches and 17 lbs, this was one big fish.  This is the fourth (or more) snakeheads that Mike or his clients have caught in the past four days of fishing.
Posted by Fritz at 6:50 PM