But When a Bear is in Your Kitchen, It Seems Bigger


Griffin W. Smith has some practical advice to offer about bears. As a cross-country trail runner, he has seen them in the woods many times in southern Colorado. But when a bear is in your kitchen, it seems bigger,” said Mr. Smith, 21, a biology major who was at home last week from college when he came downstairs for breakfast and found a black bear by the refrigerator, slurping from the dog’s dish.

Bears — dangerous and unpredictable always — are prowling broader areas of the West in closer contact with people than ever. In some places, drought is driving the animals out of their wilder haunts and into human settlements. Longer-term climate change, scientists say, is also disrupting bear foraging patterns, especially in and around Yellowstone National Park, where grizzlies have been compelled to search more widely for food in recent years as a tree that produces pine nuts crucial to their diets has been decimated.

Mr. Smith’s encounter here last week in Colorado’s second-largest city ended without further trouble. He ran back to the bedroom, closed the door and grabbed his phone. The bear wandered back out through a door — which had been left open for the family pets — and was gone by the time the authorities arrived.

The obvious problem with bear human interactions is two-fold.  First, there are more people who want to go and visit and live on land where bears are common.  Second, bears are hunted less, and better protected now than they have been in the past, so they are less likely to react to people as a personal danger, and more likely to see man and the works of man as a potential source of food.  And since bears are pretty much eating machines on 4 legs, that's generally a recipe for a problem. 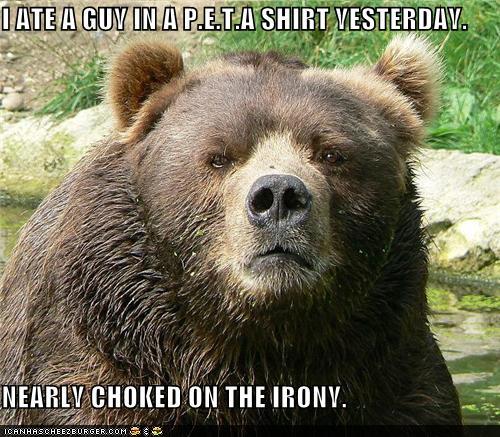 Georgia and I had an encounter with a bear once upon a time (before kids).  We were car camping in British Columbia, sleeping the back of our old Volvo station wagon.  We carefully put all our food in the car, but left the cooking equipment and a box of utensils and misc stuff out on the table.  In the middle of the night, a bear came through camp, and basically tossed it.  He knocked the camp stove around, spilled the box of utensils, and bit into a salt shaker.  We saw him on the bumper of the camper next to us jumping up and down, and trying to get in the door.  I guess we were lucky he hadn't heard you can open a car by bashing in the window...

The NYT goes on about how climate change is going to make this all worse.  It's probably all alarmist nonsense except that, yes, there will be more people in the future, and plenty of bears, and plenty of opportunity for the two to mix.
Posted by Fritz at 2:32 PM

Email ThisBlogThis!Share to TwitterShare to FacebookShare to Pinterest
Labels: Me, wildlife