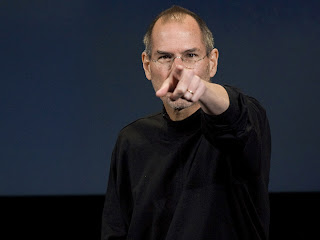 While it’s highly unlikely that President Barack Obama is looking to ask the founder and chief executive of Apple Inc. for a loan, it became a fact as of Thursday afternoon — the world’s largest technology company now has more cash on hand than the most powerful democracy on Earth has spending room.

As Republicans and Democrats continue to work towards a compromise to the country’s debt ceiling crisis, the U.S. Treasury Department said on Thursday that Washington now has a total operating balance of only US$73.768-billion.

Meanwhile, Apple currently boasts a cash reserve of US$75.876-billion, as of its most recent quarterly earnings report at the end of June...

Well, Steve Jobs knows how to run a business, too.
Posted by Fritz at 9:17 AM