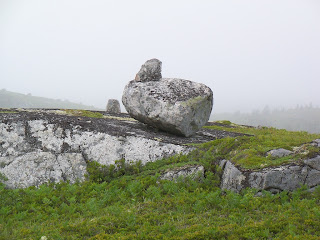 Today was cool and misty.  We went to morning talks, and then had an eco-tour, sold through the conference, and went off to visit the barrens and Peggys Cove. 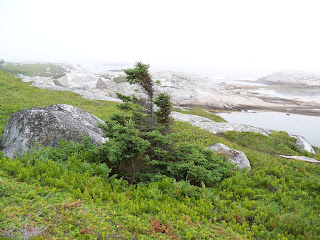 A typical scene on the barrens.  Very rough and boggy land near the coast on Nova Scotia.  The land was scoured clear of soil in the last glaciation down to the bare granite rock, and huge boulders, called glacial erratics dumped at random on the landscape by the retreating glaciers.  It is now covered with low plants, blueberry, cranberry etc.  What trees that grow (mostly conifers and alders) are small and stunted. 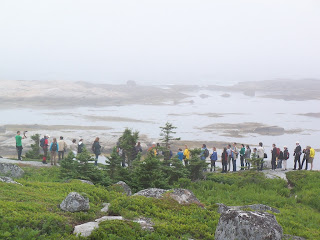 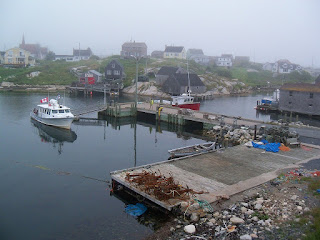 Next we stopped at Peggys Cove, a small, working fishing village, and a big tourist destination on the shores of the Atlantic.  Peggys Cove was near the site of a terrible plane crash, Swissair Flight 111, on Sept. 2, 1998, which killed all 229 passengers and crew. 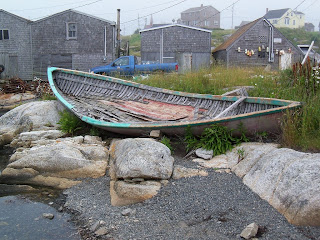 No truly working fishing village would be complete without an old wooded boat melting back into the landscape. 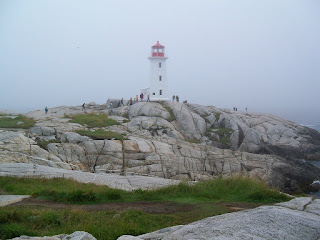 The Peggys Cove Lighthouse. Don't walk on the black rocks. They're slippery, and you might fall and die.  Others have. 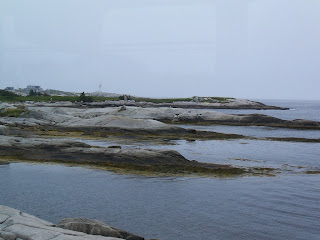 A view of Peggys Cove and Lighthouse from the main road.
Posted by Fritz at 6:32 PM