The Cougar Behind Your Trash Can


YOU have to admit, the cat had moxie.

The 140-pound cougar that was spotted last month among the estates of Greenwich — and was later struck and killed on the Wilbur Cross Parkway — has been the talk of southern Connecticut. New England, along with most of the Eastern United States, hasn’t been cougar country since the 19th century, when the animals were exterminated by a killing campaign that started in colonial times. So where had this cougar come from?

Now we know the answer, and it couldn’t be more astonishing. Wildlife officials, who at first assumed the cat was a captive animal that had escaped its owners, examined its DNA and concluded that it was a wild cougar from the Black Hills of South Dakota. It had wandered at least 1,500 miles before meeting its end at the front of an S.U.V. in Connecticut. That is one impressive walkabout.

You have to appreciate this cat’s sense of irony, too. The cougar showed up in the East just three months after the Fish and Wildlife Service declared the eastern cougar extinct, a move that would exempt the officially nonexistent subspecies of the big cat from federal protection. Perhaps this red-state cougar traveled east to send a message to Washington: the federal government can make pronouncements about where cougars are not supposed to be found, but a cat’s going to go where a cat wants to go... 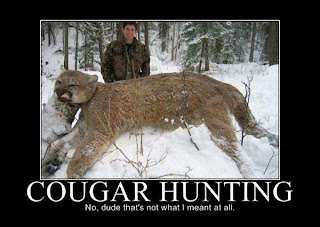 I hadn't heard about this one, but I think that's kind of cool.  I know people have been talking about spotting cougars here in the east for a long time now, and it been pooh-poohed by the authorities pretty much all along, but as we see here, there are always a few animals, that for whatever reasons, go roaming off their reservations.  With as cryptic as cougars are in places where they are common, we can be fairly sure a fair number have wandered through the east unnoticed in the past.

I really think cougars should be established throughout their former ranges, particularly in big cities, where there are lots of people to appreciate them...
Posted by Fritz at 3:33 PM