Another Hot and Sweaty Day at the Beach 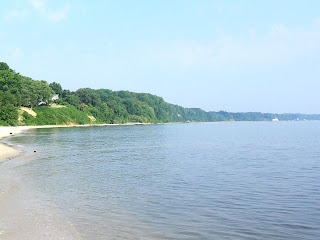 We got going this morning at 9 AM in a largely unsuccessful attempt to beat the heat.  It was mid 80s when we got started and pushing 90 by the time we finished.  There was almost no breeze, and the air was pretty humid. 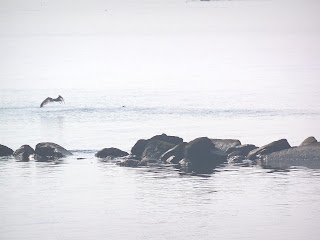 A few seagulls and terns were desultorily working over some small schools of bait fish on the south side of the jetty.  There might have been some tiny bluefish or rockfish pushing the bait fish up from below, but they couldn't have been very big from the amount of splashing. 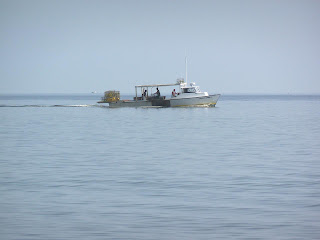 A crab boat just offshore was checking his pots, and collecting his catch. 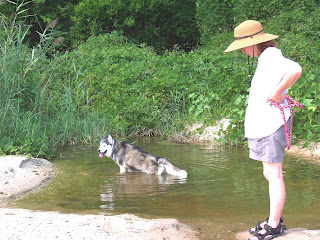 Skye was having hard time in the heat, and took a lot of short cooling dips.


There was no sign of the raptors that were so prominently out and about yesterday. 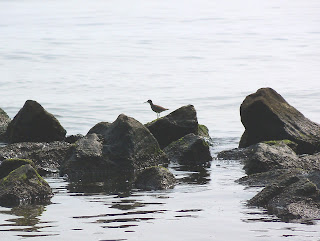 However, a little sandpiper of some sort was gleaning food off the rocks... 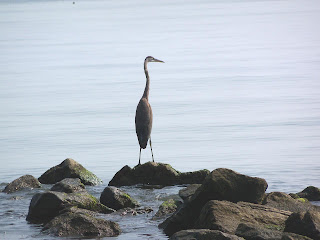 while a GBH was using the same rocks as a fishing platform. The GBH decided we were no threat, and just watched as we passed his rocks, going both up and down the beach. 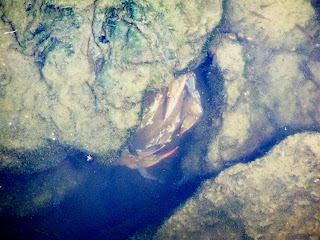 A pair of crabs.  Male crabs (on top with blue claw tips) hold and protect the female (underneath with red claw tips) until she molts, then they mate, and he continues to guard her until her shell hardens and she is safe to go.  This pair was in the rocks that line the jetty at Flag Harbor.
Posted by Fritz at 2:36 PM