How Did Snakeheads and Blue Catfish Miss The List?

9 weird fish you should be eating

A of nine edible endangered species the we could make better use of...  Curiously, 4 of the "fish" listed are not fish at all but crustaceans.


1. Asian carp (Midwest and Great Lakes regions)
Asian carp, as they are known in the United States, actually includes several different species, including the bighead, black and silver carp. Asian carp species are not bottom feeders, and so are generally lower in contaminants than the common carp. Although the FDA has not yet evaluated these fish for contaminants, they are believed to be low in mercury. These fish are native to Asia and were brought to the United States primarily by catfish farmers in the 1970s to control algal blooms in aquaculture ponds. Today, Asian carp have spread through major waterways from the Southeast through sporadic flooding events, and have moved toward the Great Lakes regions...

We've seen a video of the Silver Carp in action here.


2. Asian shore crab (East Coast states from Maine through North Carolina)
Asian or Japanese shore crab is native to to parts of Russia and Japan, but has become invasive along the East Coast, from Maine through North Carolina. It was probably introduced into the United States by international ship travel. Asian shore crabs are small, usually measuring not more than an inch and a half across, but are opportunistic feeders and will consume small fish, crustaceans, algae and anything else they come across. Its primary negative impact as an invasive species is displacement of native crab populations, as it competes for similar habitat to native blue crab, rock crab, and lobster. 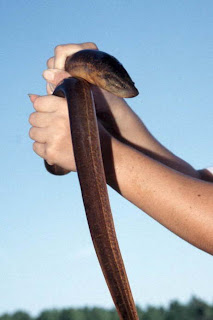 3. Asian swamp eel (Hawaii, Georgia, Florida)
Asian swamp eels are native to many parts of Asia, and are currently listed as invasive in three states: Hawaii, Georgia, and Florida. In New Jersey, their status is listed as unknown but they have recently been found there. The eels’ introduction to the wild probably took place accidentally in the Southeast (from an aquarium or fish farm escape) and they may have been introduced as a food fish in Hawaii by immigrants. They have no known predators in North America. The eels are highly adaptive, can live in just a few inches of water, and can travel short distances on dry land.

Although most Americans are not terribly fond of eels as food, largely because of their image as slimy, snaky critters, American Eels at least are considered excellent eating, and I see no reason these might not be as well.  Getting them widely accepted outside the immigrant population that probably introduced them as food may be a problem, though.


4. Chinese mitten crab (California and New Jersey)
The Chinese mitten crab is native to Southeast Asia but was introduced to California in the early 1990s, probably by way of international ship travel. It is now established throughout many California water networks surrounding the San Francisco Bay, and also in New Jersey, with several other states reporting sightings. The crabs are edible, and considered a delicacy in some cultures. They are imported live, sometimes illegally, as the sale of these crabs is prohibited in certain states. Release of live crabs from these shipments may be another means of introduction. Ecologically speaking, Chinese mitten crabs are a nuisance in non-native areas, especially in urban areas, and may clog water pumps and hamper water delivery. They also burrow into soil, which can exacerbate riverbank erosion and weaken levees.

The European green crab was introduced to the East Coast of the U.S. in the early 1800s, probably by way of ship travel. In the late 1980s, the crab was discovered on the West Coast, and invasive populations have since become established from California through Washington and up into British Columbia. The European green crab is a small but voracious predator, and it is able to outcompete other crabs for food and habitat. It eats a variety of small crustaceans (including the young of commercially important crab populations), algae, and shellfish such as oysters, clams and mussels.

Most crabs are edible, so I see no reason, other than small size that these would not be good to eat.  I've picked my way through a few Red Rock Crab in Oregon, which can't be much bigger.

The lionfish is a tropical fish native to a wide range of regions in the western Pacific Ocean. Since the early 2000s, it has become an established invasive species on the East Coast of the U.S. and in the Caribbean, probably as a result of people releasing aquarium fish in coastal waters. The lionfish is fast-growing, a voracious eater, reproduces yearround, and has no known predators in the areas to which it has now been introduced, so it is quickly becoming a threat to local ecosystems, especially along the central and south Atlantic coasts. Because it is not native to the U.S., it has not traditionally been considered a food item there; however, in areas where it is native, such as the Red Sea in Greece and many islands in the Pacific, the fish are regularly consumed.

I'm acquainted with Lionfish from my ill-spent youth working in the tropical fish store.  A friend of mine got stung by one of their poisonous spines, and it was quite an ordeal.  I always kept my hands a good distance away...

The rusty crawfish is native to Kentucky, Ohio and Indiana, but it has become invasive in at least 17 states throughout the U.S., from Maine to New Mexico. Because it is a popular baitfish, this crawfish has probably been introduced into new waters accidentally by recreational fishing. Most people may not be familiar with the risks that these creatures can pose to new environments. Rusty crawfish can establish themselves in new areas easily, as females can lay 500 eggs or more at a time. The rusty crawfish is a voracious and opportunistic eater, and can change the ecology of regions it invades by reducing the abundance and diversity of plants and aquatic life where it lives. Because it can eat twice as much as native crawfish, it also has the potential to outcompete and overtake the local crawfish population.

There are a lot of different crayfish, so I would never be confident that the ones I was catching were the right "invasive" crayfish, and not the native, and potentially a risk crayfish.  But, they probably all cook up up into good "mudbugs."

Two populations of tilapia have been introduced to the U.S. through escapes from fish farms — the Mozambique tilapia, which is native to southern coastal Africa, and the blue tilapia, native to the Middle East and parts of Northern Africa. These fish are now established throughout many warmer southern states from Hawai`i to Florida. Tilapias can tolerate a wide range of salinity, and so can live in freshwater or marine habitats (and everything in between). 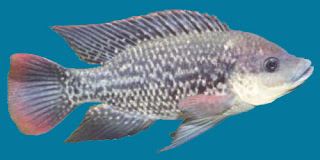 I used to breed Tilapia back in the aquarium store days.  Actually, the trick is to keep them from breeding.  However, I've never been able to get over thinking of Tilapia as aquarium fish, and can't really like to think of them as a food fish.  It's not a big deal, but there are other fish I'd rather eat.


9. Walking catfish (Florida)
The walking catfish is native to Southeastern Asian countries, but has become invasive in southern Florida, and is at risk for becoming invasive in other states. It was introduced to the U.S. in the 1960s, probably as a result of the aquarium trade, and after attempts to farm the fish commercially here. The walking catfish is unusual because it is able to live out of water for short periods, and even to move short distances over land. This allows it to take advantage of flooded fields, canals, and even rainy days to expand its territory. This fish has previously invaded several eastern coastal states and Nevada, but as of 2011, has been eradicated from all locations except for Florida.

Another fish I'm familiar with from the aquarium day, although we mostly sold the pure white albino version.  Pretty much an like eel with whiskers, they are in the habit of jumping out of aquaria and walking around the floor until retrieved, or dessicated.  Yeah, they're probably edible, but are they worth the trouble?
Stolen from Ken Tidy.
Posted by Fritz at 7:48 PM