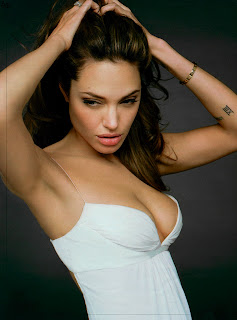 Actually, I decided to make Angeline Jolie my Rule 5 Saturday subject long before I found this article, where I found that she, and her family (with the possible exception of Brad Pitt) like to eat crickets, apparently one of the national foods of Cambodia, original home of one of her adopted kids.


"My boys love to eat crickets. It’s their favorite thing," she says. "When I first gave it to them, I thought, I wanted them to understand culturally, I didn’t want them to be turned off by something that was their culture," Jolie goes on... 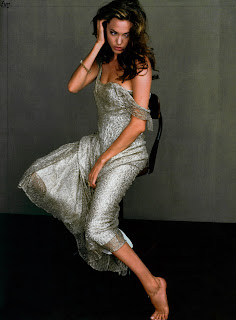 ...So when they returned to Cambodia for Jolie's Louis Vuitton shoot, she had a friend wrangle two to-go boxes of crickets and the family indulged on them right in the car.  "They're good - they are like a potato chip," she says. And while the actress and spokesperson has yet to taste some spider soup, "you gotta try everything," she adds.

Angelina is the daughter of actor Jon Voight and actress Marchelline Bertrand.  Despite her parenting, she had some trouble breaking into acting as a profession, being rejected numerous times for being "too dark".  She has had a rocky relationship with her dad due to his marital infidelities.  I like it that she had to work at it to break in to the business; it suggests a certain honesty I had not expected from Hollywood. I like dark... 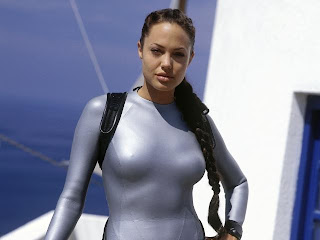 While she has had numerous film successes, of course, among of the best remembered are the "Tomb Raiders" films.  Of all the movies based on video games (and then comic books), I have to say, I think these are the best.  Mind you, there's nothing wrong with Hugh Jackson, but he just doesn't stir my blood the way Angelina does.


"Angelina Jolie was born to play Lara Croft but  Simon West makes her journey into a game of Frogger."

Her personal life has been full of high drama.  She had a live-in boy friend at age 14.  The break up at age 16 caused her to "dedicate her life to acting." She married actor Jonny Lee Miller in 1996, and divorced him in 1999, staying on good terms with him.

She admits to a "brief sexual relationship" to actress Jenny Shimizu in 1996, who, in turn, claims the affair went on much longer.  Whatever.

On the canonical scale of Lesbian hotness, with Rosie O'Donnell setting the lowest possible mark, Angelina forms the upper boundary at infinity.  Not only is she hot, interested in women, she's potentially available to us guys too; at least if you're Billy Bob Thornton (married 2003-2005) or Brad Pitt (pseudo-married 2005 to the present, as far as I know).  You can even envision her doing it on film, if you try. 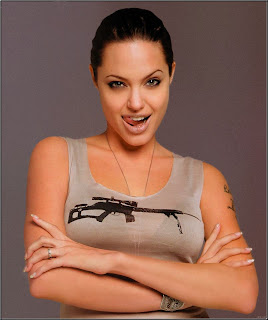 Then, of course, the tabloidacious role she played in the break up in Brad's marriage to Jennifer Aniston.  After the grief she gave poor john Voight about his infidelities....

Well I guess the luscious fruit doesn't fall far from the tree.

It wouldn't be fair to trash her like this without mentioning all the really good work she's done for charity.  Adopting all those kids is just incredible, as I will attest, having been nearly driven mad by raising only two, and those at least mine, so I had and felt the obligation.

I could go on and on, but it's not sexy; her Wikipedia page is a good place to start for a list of the humanitarian project she has taken part in or promoted.

And rumor has it that her politics are right too, if you know what I mean.

One of the interesting roles she played was the face and body model for Grendel's mother in the 2007 movie Beowulf, an interesting mixture of live action turned into computer graphics.  I thought the movie was so so when I saw it on a cruise ship; but I loved me some Grendel's Mom... (A little NSFW in a CGA sort of way).


I thank the Rule 5 Wombat for this weeks prominent position the The Other McCain's weekly Rule 5 link collection.
Posted by Fritz at 12:01 AM