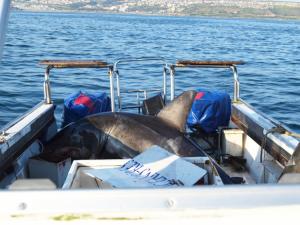 Great white thumps on to boat


A three-metre great white shark breached into a vessel carrying marine researchers yesterday.
While none were injured, they said it gave them “the fright of our lives”.

Six researchers from Oceans Research, a Mossel Bay-based marine research organisation, were on the boat Cheetah collecting data on sharks near Seal Island, in Mossel Bay, led by field specialist Dorien Schroder. It was 8.30am.

“Activity around the boat ceased for about five minutes and all was pretty quiet at the stern,” Schroder said. “Next thing, I hear a splash and see a great white breach out of the water from one side of the boat hovering, literally, over a crew member chumming on the port side.”

The 500kg shark landed on the boat’s fuel and bait storage containers – with half of its body onto the boat, she said. The team hoped the shark would make its way back into the water, but watched horrified as the it panicked and became stuck, thrashed around and damaged equipment on board.

The shark began cutting the fuel lines as it twisted and turned on the deck. Schroder helped the researchers to safety while other team members rushed towards a safe area on the boat...

That'll get your heart going better than a cup of Starbuck's "Whatever is Boldest Today".
Posted by Fritz at 6:34 PM