"It's All About Moderation"


Update:We made a mistake in our original calculations. The calorie-count for the first lady’s order was actually 1,700, not the 1,556 we originally reported. Our apologies.

First lady Michelle Obama ordered a whopper of a meal at the newly opened Washington diner Shake Shack during lunch on Monday.

A Washington Post journalist on the scene confirmed the first lady, who’s made a cause out of child nutrition, ordered a ShackBurger, fries, chocolate shake and a Diet Coke while the street and sidewalk in front of the usually-packed Shake Shack were closed by security during her visit.

According to nutritional information on Shake Shack’s Web site, the meal amounted to 1,700 calories.

Obama, who launched the “Let’s Move” campaign to combat childhood obesity last year, has previously admitted to having an “obsession with french fries,” which she says are fine to indulge in occasionally. “It’s all about moderation,” Obama told reporters.

Chocolate Shake and a Diet Coke?  Really?  Anyway, as I've said before, I don't really care what Michelle Obama eats or drinks, but I resent like hell being told what I'm supposed to eat and drink by anyone but my wife (and I resent her too, but not that  much...).

Wouldn't it be a marvelous thing if somebody conservative in the restaurant, tipsy from a sugar high, confronted her publicly, and tongue lashed her for her hypocrisy of using enough calories in one meal to provide a whole Sudanese village for a month, while downing their own 1500 calorie burger, shake and fries? 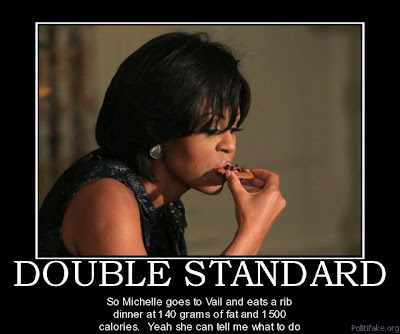 Oh right, they couldn't because the restaurant was closed to the public...
Posted by Fritz at 9:18 PM