Preston Smith (@common_alias) is an atheist progressive supporter of Hillary Clinton’s incipient 2016 presidential campaign. C. Steven Tucker (@CSteven) is a Chicago businessman, Tea Party activist and ObamaCare critic. Wednesday afternoon, Tucker sent out a Twitter message about calls to impeach President Obama. Smith responded with a sick comment — CC’d to Tucker’s wife Andrea — that appeared to be a rape threat directed at one of their teenage daughters: 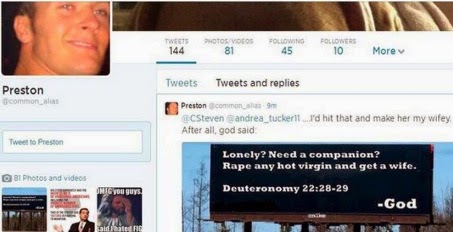 You can imagine how any parent would take alarm at such a comment. Tucker said he has reported Smith to law enforcement, but I’m afraid the Tuckers will be disappointed to learn that, from a legal standpoint, a comment like Smith’s is not be considered a “threat.” A threat, in the legal sense, requires that there be some reason for the target to fear that the person making the threat will actually carry it out.

In other words, if I say, “I’d like to beat Preston Smith to a bloody pulp,” that’s not a threat, legally. On the other hand, if I were to say, “I’ve got Preston Smith’s home address and I just booked my flight from Dulles to Miami tomorrow so that I can kill that vicious bastard with my bare hands” — well, the specificity of such a comment could be seen as a legitimate threat that might cause him to fear that an enraged redneck could show up at his front door with murderous intent.

She's been charged with assault and battery...

And finally, from Ann Alhouse, this less violent (but equally fat and ugly) woman acting out her feelings about the Hobby Lobby decision with a little casual vandalism at a Hobby Lobby store, and posting it to Instagram:


"Things you can do at #hobbylobby #keepyourrosariesoffmyovaries #prochoice." 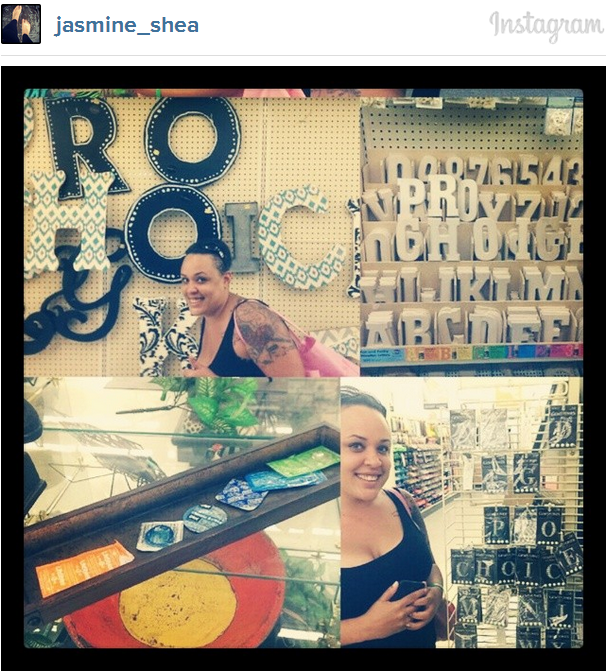 I'm torn. Making some noise = free speech. Yeah, speech doesn't necessarilypersuade, but that's a good thing. I wouldn't say it's just noise. Speech is valuable precisely because it is not coercive. Sometimes we call speech "compelling," but it depends on what you say... and how you say it.

The form of expression matters. Here, the speaker appropriates the store's merchandise (and employee labor) as a medium. And the medium is (part of) the message. This prankery strikes me as sort of fun-loving, a way to vent frustration, but I'm distracted by 2 things:

1. "Pro-choice" is the wrong word in the context where the business owners resisted being denied the choice about covering birth control and where that resistance is premised on their religion which they have the right to choose. Those who don't like the choices the business owners have made have thechoice to shop elsewhere.

2. The pranksters are taunting those who have taken a strong stand based on religion. Are we really going to taunt people about religion? If you're inclined to say yes, do you really mean it, across the board for all religions, or is this a special willingness to taunt Christians? If it's special for Christians, why is that? Is it because you think it's okay to taunt what you think is the dominant group? If Christians like the ones your protesting against really were dominant, we shouldn't, in a democracy, end up with laws forcing them to do things against their conscience, so I'd say, the existence of the birth control mandate is evidence that they are not the dominant group, in which case, you're harassing a minority. Why would you do that? Is it that you feel safe picking on Christians?

Well, she probably won't go to jail for that.