In Defense of the Bald Eagle 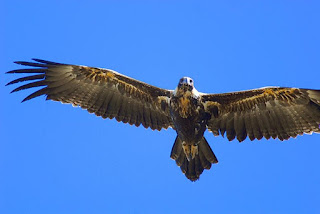 When preparing the Australian edition of PopSci, we like to change the more US-centric references and metaphors to something more... antipodean. In our December "Best of What's New" edition, a drone was described as having a wingspan similar to a Bald Eagle (the US national animal). Naturally, we changed that to "Wedgie" because it offers opportunity for hilarious misunderstanding (cf. "rooting") and also because the Wedge-Tailed Eagle is better than the Bald Eagle in the following indisputable ways: 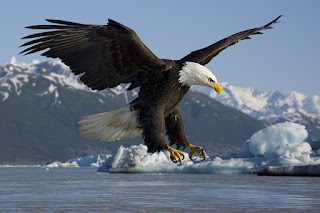 Our Wedgie is a member of the genus Aquila, which is Latin for, well, eagle. It's one of just 12 species of totally awesome, pure, no-nonsense eagles. The Bald Eagle? It's a Haliaeetus sp. which is one of those prissy sea eagles. 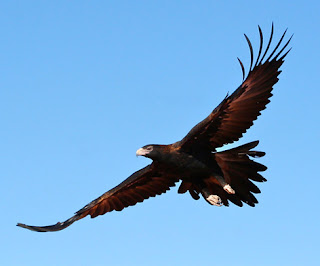 I guess Australians are all afraid of the sea, because they were brought over as convicts.


2. It has a more awesome scientific name

Ornithologists know the Wedgie as Aquila audax which is absolutely the kind of thing I would carry into battle on top of a standard and fight to the death beneath etc. Also it means "Audacious Eagle". The Bald Eagle is Haliaeetus leucocephalis. Did I spell it right? Hell, I don't even know how to SAY it right. 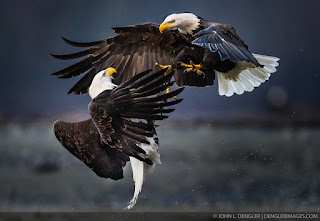 But not audacious enough to take on a fish.

Wedgies pair-bond and while sometimes they'll sit in a tree and preen each other like a couple of lovesick teenagers, other times they'll dominate the airspace over their territory by staging a series of mock-battles. This can include epic loop-the-loops and talon-on-talon duels. Bald Eagles, meanwhile, merely build the largest nests of any tree-dwelling animal (except hipsters). Like some kind of Bogan with a McMansion.

Seen Bald Eagles do all of the above, at my own beach.


4. They attack hang gliders and paragliders

Be it known: the sky belongs to the Wedgie. If you go up in it and unwisely fail to wrap yourself in steel, aluminium or carbon-composite, and fly at heights or speeds similar to the Wedgie, you WILL get attacked. What will a Bald Eagle take on? A dog. If it's little.

Proud of having a stupid bird of prey? How Aussie of you!


5. A Wedgie was the biggest confirmed eagle of all time

Back in 1931 when people used to just shoot everything they saw, a female Wedgie was confirmed as having a wingspan of 284 cm (that's 9 ft 4 in, yanks). We like to think she was only brought down with a WWI-style howitzer. Other reports of Wedgies with wingspans of 310 cm plus are deemed "unreliable" but we're prepared to offer benefit of the doubt. Biggest Bald Eagle? Maybe 244 cm. In Alaskan centimetres.

Size isn't everything, as all Aussies should know.


6. They will attempt to eat emus

For Americans and other aliens, an emu is Australia's even-more-insane version of an ostrich. It is a flightless bird that weighs 60 kg and stands two metres tall. A Bald Eagle will eat fish out of a stream, but only if they are organic and mercury-free. Bonus info: a Wedgie will also eat dead kangaroo from the middle of the road and attempt to stare down an approaching semi-trailer. We admit the Wedgie cannot destroy the semi-trailer with heat-vision or telekinesis, but given the direction evolution has taken with this bird so far, it's only a matter of time...

When the Ospreys leave for the year, and the Bald Eagles can no longer steal from them (there's a reason the Federal Government adopted the Bald Eagle as it's symbol, over Ben Franklin's advice), Bald Eagle, they happily switch to a diet of sea ducks, and road kill.


7. The Wedge-tailed eagle has a wedge-shaped tail...

While the bald eagle is... uh... oh apparently it's from "piebald" because it has a two-tone paint job and then the word evolved over time to blah blah blah. Sorry, I was here to admire a kick-ass raptor, not get an etymology lesson. AQUILA AUDAX VICTOR! 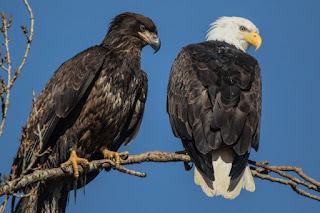 The Wedgie just looks kind of like a teenage Bald Eagle. He wants to grow up looking as cool as Mom and Dad.
Posted by Fritz at 2:05 PM