Harvey Weinstein Is a Democrat and a Pervert, But I Repeat Myself

How much money has film producer Harvey Weinstein donated to Democrats over the past 25 years? Thousands upon thousands, and you can add it up yourself. But now Democrats are being urged to shun Weinstein’s money because, well, he keeps acting like a Democrat:


An investigation by The New York Times found previously undisclosed allegations against Mr. Weinstein stretching over nearly three decades, documented through interviews with current and former employees and film industry workers, as well as legal records, emails and internal documents from the businesses he has run, Miramax and the Weinstein Company. . . .


During that time, after being confronted with allegations including sexual harassment and unwanted physical contact, Mr. Weinstein has reached at least eight settlements with women, according to two company officials speaking on the condition of anonymity. Among the recipients, The Times found, were a young assistant in New York in 1990, an actress in 1997, an assistant in London in 1998, an Italian model in 2015 and Ms. O’Connor shortly after, according to records and those familiar with the agreements.  . .


You can read the whole thing. Among the women Weinstein reportedly harassed were actresses Ashley Judd and Rose McGowan. And I say “reportedly,” because Weinstein is threatening to sue the New York Times for libel. Here’s an interesting headline:

Democrats help Democrats, you see. In his response to the allegations, Weinstein says: “I came of age in the 60’s and 70’s, when all the rules about behavior and workplaces were different. That was the culture then.” Ann Althouse calls this the “Roman Polanski excuse.”

It will be interesting to see if Weinstein  escapes professional and personal ruin because of his democratic relationships.

WHENEVER YOU SEE A BUNCH OF HOLLYWOOD TYPES TALKING FEMINISM ON AN AWARDS SHOW, remember that they knew about Harvey Weinstein and didn’t say anything, because they valued their careers more than their alleged principles.

If it weren't four double standards, they'd have no standards at all. 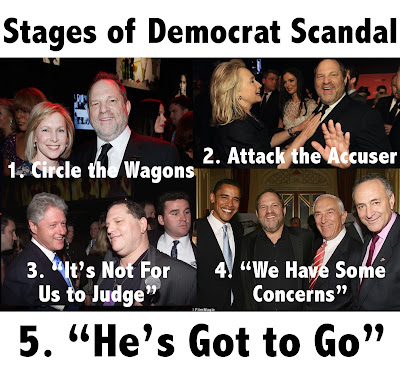 Wombat-socho was on time and with budget with "Rule 5 Sunday: Autumn Girls" and "FMJRA 2.0: Birthday Weekend".