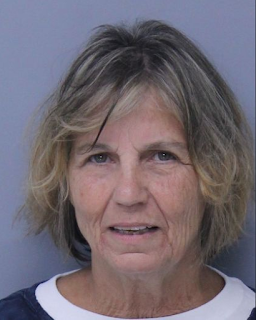 A Florida woman was shocked last week when she was confronted with a naked intruder in her house -- eating pineapple.

Mary Hamilton, 63, told deputies she went inside the St. Augustine home on Oct. 5 because “the door was open for me to come inside,” St. Johns County Sheriff’s Office told News4Jax.

After the homeowner discovered the nude intruder eating canned pineapple, she retreated to her car and called police.

Hamilton reportedly went inside the home, seized a shirt that belonged to the homeowner’s son and consumed some leftovers from the refrigerator, deputies said.

Who among us hasn't wandered naked around the neighborhood, checking for open doors, and helping ourselves to their clothes and  food?

And the Masshole's of the day: Skinny dippers disrupt wedding reception


A pair of skinny-dippers gave a wedding reception at a scenic Massachusetts restaurant more of a view than expected.

Zachary Tomko tells WHDH-TV he didn't realize there was a restaurant nearby when he and Holly O'Neil jumped naked into the water at Salisbury Beach on Saturday.

Salisbury Police Chief Thomas Fowler tells The Boston Globe his department received several calls about the nude swimmers from both beachgoers and members of the wedding party.

Bride Leah Allen says the swimmers made for a "really interesting wedding day," and she applauded them for braving the cold water.

Now that's a good sport.  Both cribbed from "Saturday Morning Weird News Dump" at Ace's.
Posted by Fritz at 5:52 PM