Reason #5741 That Trump Was Elected

Trump’s Delicious Tax Cut: The GOP proposal is simpler and fairer than the status quo.

President Donald J. Trump last week promised Americans “a giant, beautiful, massive — the biggest ever in our country — tax cut.” As delicious as that sounds, Trump’s tax overhaul may be tastiest for what it makes tiny, appealing, and compact: the 1040 tax return.

If Washington Republicans manage not to botch tax reform — as they wrecked Obamacare repeal — simplification should be among the new system’s most attractive elements, along with its consolidation of seven tax rates to three: 12, 25, and 35 percent. Letting Americans keep more of their money should energize an economy finally awakening from the slumber of the Bush-Obama years.

House Speaker Paul Ryan (R., Wis.) proposes a simple postcard for filing typical tax returns. Rather than the current 1040 form’s 79 lines, Ryan’s postcard contains 14. With nearly every deduction and exemption discarded — beside the home-mortgage and charitable write-offs — there simply would be fewer lines to fill. 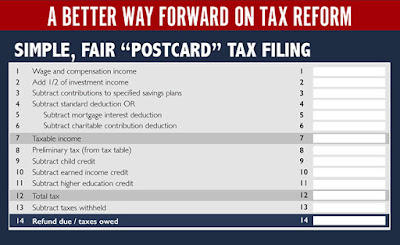 Well, the Republicans haven't missed a chance to miss a chance since Trump was elected.


A top House Republican on Wednesday predicted Congress would vote to pass a tax bill on Dec. 24, saying the effort to overhaul the tax code would go down to the wire.

Rep. Patrick McHenry (R-N.C.), the House GOP chief deputy whip, said he expected both the House and Senate to finish work on a tax revamp bill on Christmas Eve.

What could go wrong, or to state it another way, when have the Republicans actually delivered a bill on time?
Posted by Fritz at 8:45 AM