UnitedHealth Revenue Grows Despite ACA Exit. As Instapundit quips "What do you mean, despite?" 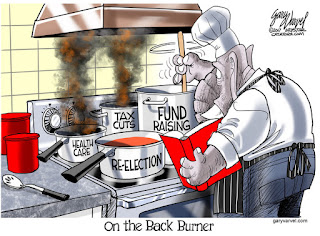 End To ObamaCare Subsidies Leaves Congress In A Tight Spot. Trump Gives Congress A Kick In The Rear To Finally Act On Health Care.  But is one enough? While liberals complain that "Trump Executive Order On Obamacare Is “Pen And Phone” Legislation", David French (no Trump fan) Trump Was Right to End Unconstitutional Obamacare Subsidies


t’s a sad sign of our times that the constitutionality of any given government action is now seen as a wholly secondary consideration, subordinate to politics and arguments about politics. And so it is with Donald Trump’s necessary decision to halt federal payments of cost-sharing subsidies to insurance companies.

For example, here’s how the Washington Post led off its coverage of Trump’s decision: “President Trump is throwing a bomb into the insurance marketplaces created under the Affordable Care Act, choosing to end critical payments to health insurers that help millions of lower-income Americans afford coverage.” . . . 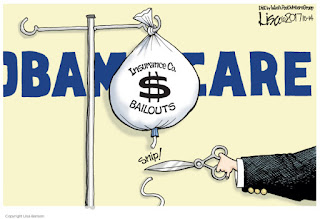 The Constitution doesn't matter to Dems when it's contrary to their wishes.


A bipartisan Senate deal to curb the growth of health insurance premiums is reeling after President Donald Trump reversed course and opposed the agreement, and top congressional Republicans and conservatives gave it a frosty reception.

Sens. Lamar Alexander, R-Tenn., and Patty Murray, D-Wash., announced their accord Tuesday after weeks of negotiations and five days after Trump said he was halting federal subsidies to insurers. Under the lawmakers’ agreement, the payments would continue for two years while states were given more leeway to let insurers sidestep some coverage requirements imposed by President Barack Obama’s health law.

In remarks Tuesday in the Rose Garden, Trump called the deal “a very good solution” that would calm insurance markets, giving him time to pursue his goal of scrapping the Affordable Care Act, the target of Republican derision since it was signed into law in 2010.
Although top Democrats and some Republicans praised the Alexander-Murray agreement, Trump backed off after a day of criticism from many in the GOP.

In an evening speech at the conservative Heritage Foundation, he said that “while I commend” the work by the two senators, “I continue to believe Congress must find a solution to the Obamacare mess instead of providing bailouts to insurance companies.”

Sorry Everybody, But Trump Hasn't Instigated The Obamacare Apocalypse


The Trump White House has issued two Obamacare-related policy announcements this week: announcements that some characterize as “gutting” or “sabotaging” the health care law. But a sober, factual analysis reveals that the Trump decisions will be fairly modest—and largely positive—in their effect.
. . .
Trump’s executive order simply reverts back to the pre-2016 rules. When some pundits hysterically describe this change as the “sabotage” and “gutting” of Obamacare, they’re talking about rules that were in place for 7.5 of Obama’s 8 years in office.


Iowa is abandoning its quest to shed major elements of the Affordable Care Act, after federal health officials failed to approve the plan in time for the insurance-buying season that begins in just over a week.

In announcing the withdrawal of what the state has called a crucial “stopgap” plan to prevent its marketplace from collapsing, Iowa Gov. Kim Reynolds (R) on Monday did not mention the president’s intervention, instead thanking Trump for trying to repeal the ACA and blaming the law itself for what she called its inflexibility.

Much to the Washington Post's disappointment.  The Health 202: Obamacare may lose 1.1 million people because of advertising cuts. Do they really think advertising is that effective?

Warren: fighting for a single-payer healthcare system is a “winning issue” for Democrats nationally in the 2018 midterm elections.


“Healthcare is a basic human right and that means we’re going to get Medicare for all, it means we are going to make the kind of changes we need to make in this country so everyone gets access to healthcare and nobody goes broke doing it,” she said. “I think this is about our values. It’s about what we are willing to get out there and fight for.”

What single-payer means: Britain's National Health Service provokes fury with indefinite surgery ban for smokers and obese. Who among us has no bad habits? Besides Georgia, I mean.