Chesapeake Menace Gets a New Name 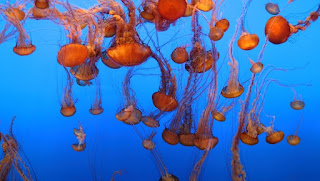 
Jellyfish sting swimmers, clog fishing nets, and in high numbers can close beaches. But despite their nuisance to humans, they play an important role in the marine ecosystem - including in the Chesapeake Bay, where they protect commercially valuable Eastern oysters from predators. 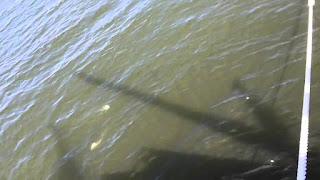 Huh? I've never heard that, and I can't think of an oyster predator that would be affected much by the Sea Nettles.


Scientists recently discovered that some jellyfish in the Bay are quite different from their ocean cousins. This led scientists from NOAA and the Smithsonian Institution's National Museum of Natural History to declare them as two different species. The newly recognized bay nettle jellies (Chrysaora chesapeakei) are noticeably smaller than their saltwater relatives, and have only half as many tentacles.

Does having fewer tentacles mean less of a sting? Likely not. But this new discovery may inspire other scientists to take a closer look at jellies in other parts of the world to see if there are other cases of mistaken identity.

What a lousy article. It doesn't even bother to go into how the investigators determined that the Bay's Sea Nettles were different than their open ocean sister species. But as I suspected, it was DNA not the tentacle count.
Posted by Fritz at 6:35 PM