Great Tits Evolve in Response to Pressure from Man 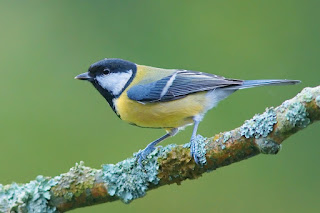 Birds might be evolving to eat from bird feeders, study says

In a study published Thursday in Science, researchers report that great tits in the United Kingdom evolved to have lengthier bills in a matter of decades. The longer the beak, the easier the access to food in the hanging backyard buffets popular in Britain — and, the data show, the healthier the offspring: Longer-beaked birds produced more chicks that fledged.

The researchers came upon this example of rapid, possibly human-driven natural selection by starting not with the birds’ beaks, but with their DNA. Both Britain and the Netherlands are home to great tit populations that have been studied for many years, and the team suspected that the birds’ genes might hold clues into whether they’ve evolved differently.

So what the heck did you think I meant? Although that might well be true, too.


But after sifting through the genomes of nearly 3,000 birds, the researchers spotted some distinctive sequences. The related genes in humans, they discovered, control face shape. What’s more, the areas where differences popped up were associated with beak shape in Darwin’s famed finches.

“So we’re thinking, ‘Well, this looks like a beak thing here,'” Spurgin said. “What that told us was that the same bits of DNA that control beak length are actually under natural selection.”

Further evidence followed. Measurements dating to the 1970s showed that the U.K. great tits’ beaks had increased in length by about .2 millimeters, Spurgin said — a small but “observable” difference. The birds with the longer-beaked gene variants successfully raised about one more chick every five years than those with the short-billed variants.

0.2 millimeters longer? That's a width known to us weekend carpenters as a "cunthair."

Are we going to tolerate this gross violation of the "Prime Directive?" Don't we need federal bird feeder inspectors to make sure that bird seed is equally available to all birds, regardless of bill length, paid for by nearly prohibitively expensive bird feeding licenses?