Reason #5762That Trump Was Elected 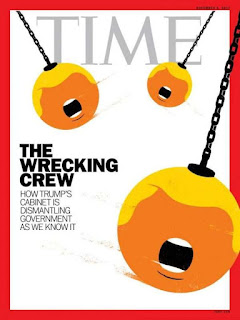 Time: Trump's Cabinet 'Wrecking Crew' Is 'Dismantling Government As We Know It'. And they say that like it's a bad thing.


The most recent cover of Time Magazine — or I should say what's left of it, given its parent company's recent decision "reducing ... circulation and frequency" of the formerly iconic publication — calls President Donald Trump's cabinet "The Wrecking Crew" on a mission of "dismantling government as we know it."

Refining their appeal to a more selective audience or something.

The cover's word selection is obviously out of line, as none of the three is proposing to "dismantle" — meaning to "take (something) apart" (and not put it back together) — the agencies under their charge. The headlined addition of "as we know it" doesn't change that. But it does feed leftist paranoia, which is apparently the point.

Of course, none of Time's four articles pointed out that "government as we know it" has gone from spending just over $2 trillion per year to just shy of $4 trillion in the past 20 years. After taking inflation into account, that's a 41 percent increase in real terms. Today's "government as we know it" doesn't accomplish 41 percent more than it did 20 years ago — unless getting in the way of progress is considered an accomplishment. . .