And MDDNR is selling it like a landslide: Striped Bass Survey Shows Healthy Population Growth


Results of the Maryland Department of Natural Resources 2017 young-of-year striped bass survey in the Chesapeake Bay shows the fish is reproducing in strong numbers. The annual survey’s index is 13.2, above the 64-year average of 11.7. 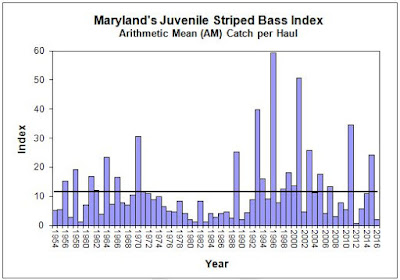 I managed to find a graph with all the data except 2017, but you get the idea. The inter-annual variation is huge, and while an average year is OK, it's not really a big deal. The population is made or broken with the really good years, which produce many times the "average."


Striped bass, popularly known as rockfish, is Maryland’s state fish. The fish spawns in the Chesapeake Bay and its tributaries each spring. The survey is conducted annually to track the reproductive success of this important species and help predict future abundance.

The index represents the average number of young-of-year striped bass – those less than 1 year old – captured in 132 samples.

“Strong reproduction in three of the past seven years is an encouraging sign for the coastal population and future fishing opportunities,” Fishing and Boating Services Director Dave Blazer said.

During this year’s survey, department biologists collected more than 33,000 fish of 62 species, including 1,741 young-of-year striped bass. The most productive area surveyed for rockfish was the upper Chesapeake Bay, their largest spawning area.

Results of this year’s survey also showed high white perch reproduction in the upper bay and Nanticoke River. Additionally, the survey found American shad reproduction was above average, primarily due to its success in the Potomac River.

So shad in the mainstem tributaries and Susquehanna are still failing.
Posted by Fritz at 7:52 PM