Before the Obama administration approved a controversial deal in 2010 giving Moscow control of a large swath of American uranium, the FBI had gathered substantial evidence that Russian nuclear industry officials were engaged in bribery, kickbacks, extortion and money laundering designed to grow Vladimir Putin’s atomic energy business inside the United States, according to government documents and interviews.
Federal agents used a confidential U.S. witness working inside the Russian nuclear industry to gather extensive financial records, make secret recordings and intercept emails as early as 2009 that showed Moscow had compromised an American uranium trucking firm with bribes and kickbacks in violation of the Foreign Corrupt Practices Act, FBI and court documents show.
They also obtained an eyewitness account — backed by documents — indicating Russian nuclear officials had routed millions of dollars to the U.S. designed to benefit former President Bill Clinton’s charitable foundation during the time Secretary of State Hillary Clinton served on a government body that provided a favorable decision to Moscow, sources told The Hill.
The racketeering scheme was conducted “with the consent of higher level officials” in Russia who “shared the proceeds” from the kickbacks, one agent declared in an affidavit years later.
Rather than bring immediate charges in 2010, however, the Department of Justice (DOJ) continued investigating the matter for nearly four more years, essentially leaving the American public and Congress in the dark about Russian nuclear corruption on U.S. soil during a period when the Obama administration made two major decisions benefitting Putin’s commercial nuclear ambitions.
The first decision occurred in October 2010, when the State Department and government agencies on the Committee on Foreign Investment in the United States unanimously approved the partial sale of Canadian mining company Uranium One to the Russian nuclear giant Rosatom, giving Moscow control of more than 20 percent of America’s uranium supply.
When this sale was used by Trump on the campaign trail last year, Hillary Clinton’s spokesman said she was not involved in the committee review and noted the State Department official who handled it said she “never intervened … on any [Committee on Foreign Investment in the United States] matter.”
In 2011, the administration gave approval for Rosatom’s Tenex subsidiary to sell commercial uranium to U.S. nuclear power plants in a partnership with the United States Enrichment Corp. Before then, Tenex had been limited to selling U.S. nuclear power plants reprocessed uranium recovered from dismantled Soviet nuclear weapons under the 1990s Megatons to Megawatts peace program.
“The Russians were compromising American contractors in the nuclear industry with kickbacks and extortion threats, all of which raised legitimate national security concerns. And none of that evidence got aired before the Obama administration made those decisions,” a person who worked on the case told The Hill, speaking on condition of anonymity for fear of retribution by U.S. or Russian officials.
The Obama administration’s decision to approve Rosatom’s purchase of Uranium One has been a source of political controversy since 2015.
That’s when conservative author Peter Schweitzer and The New York Times documented how Bill Clinton collected hundreds of thousands of dollars in Russian speaking fees and his charitable foundation collected millions in donations from parties interested in the deal while Hillary Clinton presided on the Committee on Foreign Investment in the United States.
The Obama administration and the Clintons defended their actions at the time, insisting there was no evidence that any Russians or donors engaged in wrongdoing and there was no national security reason for any member of the committee to oppose the Uranium One deal.
But FBI, Energy Department and court documents reviewed by The Hill show the FBI in fact had gathered substantial evidence well before the committee’s decision that Vadim Mikerin — the main Russian overseeing Putin’s nuclear expansion inside the United States — was engaged in wrongdoing starting in 2009.

So the Obama Administration knew Russia was illegally bribing American officials in relation to the uranium deal, including the Clinton Foundation while Hillary Clinton was Secretary of State, and did nothing. (Read the whole thing for more details on Russia’s kickbacks and bribery schemes.)

In general, when the Democrats accuse the Republicans of anything at all, it's a safe bet that they are neck deep in it, and they're hoping to transfer attention to the alleged Republican crimes, while delaying investigation into, denying, and covering up their own. That's the "Russian collaboration" issue in a nutshell.


Judicial Watch today released 1,617 new pages of documents from the U.S. Department of State revealing numerous additional examples of classified information being transmitted through the unsecure, non-state.gov account of Huma Abedin, former Secretary of State Hillary Clinton’s deputy chief of staff, as well as many instances of Hillary Clinton donors receiving special favors from the State Department.
The documents included 97 email exchanges with Clinton not previously turned over to the State Department, bringing the known total to date to at least 627 emails that were not part of the 55,000 pages of emails that Clinton turned over, and further contradicting a statement by Clinton that, “as far as she knew,” all of her government emails had been turned over to department.

Speaking of Judicial Watch, they also forced the discovery of “30 pages of documents related to the June 27, 2016, tarmac meeting between former Attorney General Loretta Lynch and former President Bill Clinton.” You know, notes the FBI swore didn’t exist. Judicial Watch said they want copies of the docs no later than late November. 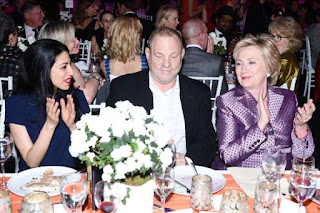 
So how much of Harvey Weinstein’s money will the Clinton Foundation be returning? Let me do a quick little calculation here…add it all up…carry the one…and the answer is…zero. (Hat tip: Director Blue.)

She probably can't even count it.
Posted by Fritz at 5:01 PM