How About Some More Obamacare Schadenfreude? 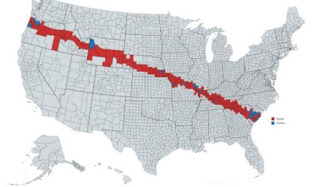 The Spiral of Doom for Obamacare continues. 1,332 Counties Will Only Have One Health Insurer on Obamacare Exchange in 2018 and 40 counties in the United States will have no choices on the Obamacare exchanges Molina Healthcare Pulling Out Of Two States, Raising Premiums 55% In Remaining States. But they're mostly deplorables in flyover eclipse  country, so what's the big deal.  You know like Idaho where Health Insurers Request Premium Rate Hikes As High As 81% . It's not like they're illegal aliens or anything. 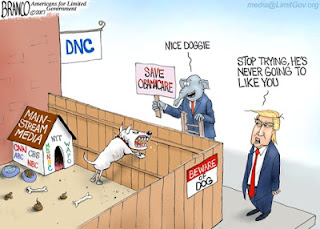 “Obamacare Won’t Pay For My Back Surgery, But It Will Pay For Opioids”. Because they care. And by way of Wombat-socho's "In The Mailbox: 07.31.2017" Memo To Republicans: Obamacare Shoved 2.6 Million Out Of The Individual Market This Year. And they're all gonna die! Because Socialized medicine kills! Regulation is Stifling Accessible Healthcare But to Democrats that's a feature, not a bug. 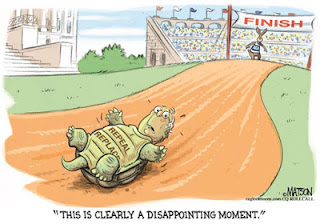 And don't get me going on the Republicans. A succession of Republican failures on healthcare, which is understandable when (former) leaders like Eric Cantor comes clean, admits he didn’t believe his own ACA rhetoric. They Never Really Hated Obamacare.  Rushbo: Obamacare Implodes — and It’s the Republicans’ Problem? Quitting Time: Senate Republicans Won’t Touch This, but Schumer: Republicans Have Been In Touch About Health Care. Bipartisan Group: We Need To Break The Law To Make Obamacare Too Big To Fail. Ummm, no. And of course, Trump Is To Blame For The GOP Health-Care Debacle. 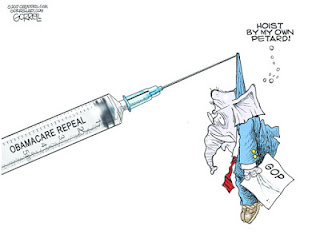 From Wombat-socho's "In The Mailbox: 08.01.17", Mark Steyn relates how The Democrats' Bet Pays Off


So there was President Obama, giving his bazillionth speech on health care, droning yet again that "now is the hour when we must seize the moment," the same moment he's been seizing every day of the week for the past year, only this time his genius photo-op guys thought it would look good to have him surrounded by men in white coats.

Why is he doing this? Why let "health" "care" "reform" stagger on like the rotting husk in a low-grade creature feature who refuses to stay dead no matter how many stakes you pound through his chest? 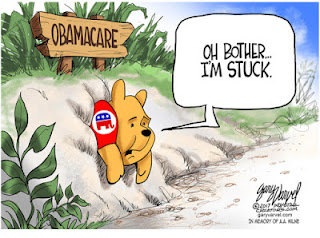 Because it's worth it. Big time. I've been saying in this space for two years that the governmentalization of health care is the fastest way to a permanent left-of-center political culture. It redefines the relationship between the citizen and the state in fundamental ways that make limited government all but impossible. In most of the rest of the Western world, there are still nominally "conservative" parties, and they even win elections occasionally, but not to any great effect (Let's not forget that Jacques Chirac was, in French terms, a "conservative"). 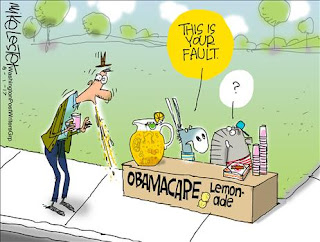 The result is a kind of two-party one-party state: Right-of-center parties will once in a while be in office, but never in power, merely presiding over vast left-wing bureaucracies that cruise on regardless.

Republicans seem to have difficulty grasping this basic dynamic. Less than three months ago, they were stunned at the way the Democrats managed to get 60 senators to vote for the health bill. Then Scott Brown took them back down to 59 (this was a popular topic among political cartoonists), and Republicans were again stunned to find the Dems talking about ramming this thing into law through the parliamentary device of "reconciliation." And, when polls showed an ever larger number of Americans ever more opposed to Obamacare (by margins approaching three-to-one), Republicans were further stunned to discover that, in order to advance "reconciliation," Democrat reconsiglieres had apparently been offering (illegally) various cosy Big Government sinecures to swing-state congressmen in order to induce them to climb into the cockpit for the kamikaze raid to push the bill through. The Democrats understand that politics is not just about Tuesday evenings every other November, but about everything else, too. 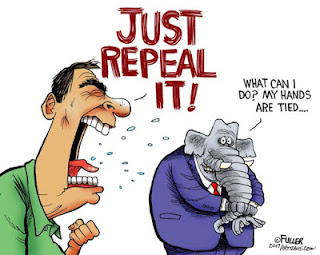 A couple of proposals, The Executive Orders That End Obamacare - Once and For All 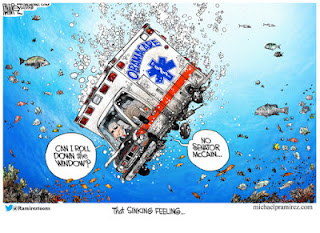 Executive Order #2: President Trump should issue an immediate Executive Order demanding disclosure of all financial interests and ownership in healthcare related companies or stock by every member of Congress- including all family members and offshore accounts. Failure to disclose will result in a long prison term.

And second, a long and serious one: The Bill To Permanently Fix Health Care For All

Majority Of Americans Say It’s Time To Move On From Health-Care Reform. Let Obamacare finish itself?

Eager to Impose Single-Payer on Whole Nation, Sanders Cannot Explain Why It Failed in His State

“How do you make it national if you can’t even get it in Vermont and California?” the CNN host asked.

Because they want the deplorables in flyover country to pay their bills.
Posted by Fritz at 9:55 AM