US student is rescued from giant vagina sculpture in Germany 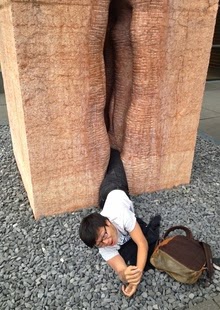 On Friday afternoon, a young American in Tübingen had to be rescued by 22 firefighters after getting trapped inside a giant sculpture of a vagina. The Chacán-Pi (Making Love) artwork by the Peruvian artist Fernando de la Jara has been outside Tübingen University's institute for microbiology and virology since 2001 and had previously mainly attracted juvenile sniggers rather than adventurous explorers.

According to De la Jara, the 32-ton sculpture made out of red Veronese marble is meant to signify "the gateway to the world".

That's almost the very definition of an "attractive nuisance."
Posted by Fritz at 4:31 PM