Why Lois Lerner Plead the 5th

IRS under Lois Lerner turned over 1.1 million pages of taxpayer information to the FBI 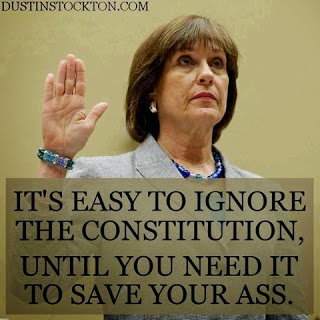 The Internal Revenue Service may have been caught violating federal tax law: In October 2010, the agency sent a database on 501(c)(4) social-welfare groups containing confidential taxpayer information to the Federal Bureau of Investigation, according to documents obtained by a House panel.

The information was transmitted in advance of former IRS official Lois Lerner’s meeting the same month with Justice Department officials about the possibility of using campaign-finance laws to prosecute certain nonprofit groups. E-mails between Lerner and Richard Pilger, the director of the Justice Department’s election-crimes branch, obtained through a subpoena to Attorney General Eric Holder, show Lerner asking about the format in which the FBI preferred the data to be sent.

“This revelation that the IRS sent 1.1 million pages of nonprofit tax-return data — including confidential taxpayer information — to the FBI confirms suspicions that the IRS worked with the Justice Department to facilitate the potential investigation of nonprofit groups engaged in lawful political speech,” Oversight Committee chairman Darrell Issa, a California Republican, and subcommittee chairman Jim Jordan wrote in a letter to IRS commissioner John Koskinen. The two lawmakers also raise questions about the timing of the meeting, just weeks before the 2010 midterm elections, when Republicans recaptured a majority in the House of Representatives.

The Justice Department never prosecuted social-welfare groups, and e-mails from IRS officials show their awareness that, as a result of the Supreme Court’s 2010 decision in the Citizens United case, which allowed unlimited amounts of money from nonprofit groups and labor unions to flow into the political process, the law did not favor a crackdown on anonymous donations to politically orientated nonprofits, which sprouted up on all sides in the wake of the ruling. “We don’t have the law to do something,” an IRS official responsible for tax-exempt organizations said in a September 2010 e-mail.

Of course, by law the IRS is prevented from sharing tax payer information with any other governmental agency (I suppose there are exceptions for subpoenas, but there's no indication that the FBI actually officially sought these data).  They were fishing for possible violations of campaign finance laws, at the request of a large number of Democrat Senators and Congressmen, who were in no mood to allow the Supreme Court to free a flood of money that might be used to oppose them, as the Citizens United ruling threatened to do.

At this point, Republicans should consider the IRS to be enemy held territory, and begin a campaign to blockade its funding and starve it into submission. It's called the "power of the purse" and the founders expressly considered it when setting up the Constitution..

Or, there's always my "Modest Proposal" for political affirmative action in federal hiring. Since we clearly can't trust federal bureaucrats not to play partisan games, we have to make sure that all parties are fairly represented in the federal work place, even (especially) if we have to fire half of the current occupants of the positions, and expressly replace them with republicans. Then let the right half watch and snitch of the left and vice versa.
Posted by Fritz at 1:24 PM