Strange priorities at the VA


The administrators at the Veterans Administration have apparently been busy while old soldiers waited to see a doctor, after all. Serving those who served is not necessarily a priority, but saving the planet is Job 1. Solar panels and windmills can be more important than the touch of a healing hand.
. . .
In the department’s words, it adopted a far more important mission to “become more energy efficient and sustainable, focusing primarily on renewable energy, energy and water efficiency, [carbon-dioxide] emissions reduction, and sustainable buildings.”

The green office isn’t merely a desk and telephone tucked away in the dark corner of a nondescript government building. It’s a substantial undertaking, with all the luxury, bells and whistles of a bureaucracy that means business. Eric K. Shinseki, who resigned as secretary in the wake of the VA scandal of the sin of omission, traveled the country to boast of the green initiative. In one instance, he traveled to Massachusetts to flick the switch at a half-million-dollar windmill project at the Massachusetts National Cemetery. “Nationally,” he said, “VA continues to expand its investment in renewable sources of energy to promote our nation’s energy independence, save taxpayer dollars, and improve care for our veterans and their families.

The VA scandal did not happen for lack of money: 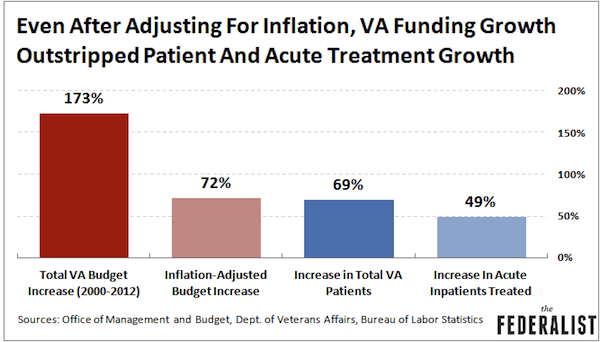 The  VA's problems are misplaced priorities; upper level administrators who wrote their own annual evaluations (a common phenomenon in government) with an eye to "earning" their expected annual bonuses by hiding the waiting lines rather than admitting to them, and fixing them.  80% of upper echelon VA executive "earned" bonuses in 2013. Now we're told that those bonuses, once awarded, cannot be revoked.  However, they can still fire all the administrators who had anything to do with the waiting lists. Oh wait, federal job retention rate is 99.45% annually.  "Civil" servants are more likely to die on the job than be fired.

The focus on "green" programs is a problem throughout the government.  Rather than focus on the job at hand (in this case treating veterans), administrators become engaged, and their interests diverted into the "green building" programs. This serves two functions. First, it gives administrators the sense of building something "lasting", a legacy, and not just handling the mundane administration of a large institution. Second, since much of the "green program" is contracted out to friends of the administration, it is a way of seeking approval from the capos.

While it might be nice to have "green energy" for the VA, they should be forcibly reminded that their first responsibility is to the veterans.

Linked at Pirate's Cove in the weekly "Sorta Blogless Sunday Pinup." Thanks, Teach!
Posted by Fritz at 10:20 AM