A liberal does the math and finds out that his annual vacation more than cancels out all of his half-assed attempts to recycle and save energy.

Flying's moral dilemma: Your family or your climate?


ONE LATE-WINTER evening in 2008, I opened up Google Earth, drew a 100-mile circle around my house in western Colorado, and vowed to stay within that minihabitat for a full year.
This unusual experiment began with a plane ticket. My grandmother was turning 90, and her birthday shindig was in Kansas, 750 miles away. I could jet in for two quality days and be home within 48 hours. Or I could spend two grueling days on the road. It was a no-brainer—and probably more so for me than for the average American. As the daughter of an Air Force fighter pilot, my childhood revolved around planes; Dad's second career as an American Airlines captain made jumbo jets the equivalent of the family car. With free family passes in hand, I grew accustomed to flying wherever and whenever I liked.

But then I stumbled across some figuresthat led me to question my ways. Grandma's party left me on the hook for 1,058 pounds of carbon dioxide emissions, the equivalent of driving myfuel-efficient car 2,600 miles—almost twice the round-trip distance to Kansas. In fact, all of my green bragging rights—the recycling, the composting, the buying local, drying laundry on a clothesline—were obliterated by flying. In 2008, I took four round-trip flights, including cross-country jaunts to New York and Washington, DC. My flight-related carbon footprint dwarfed the average Indian citizen's total annual footprint by a factor of four. 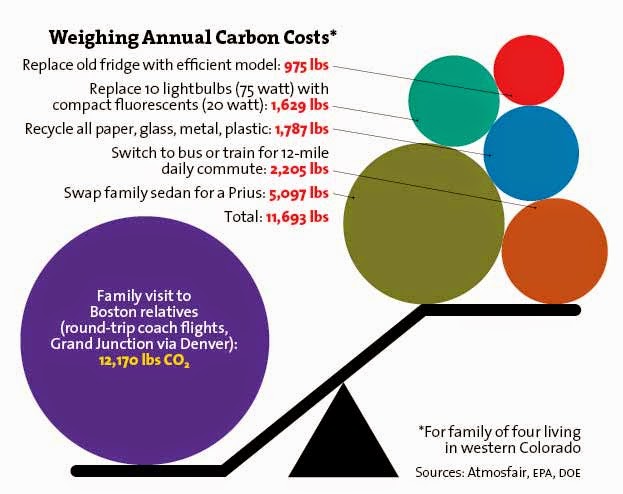 And to rub some salt into the wound.


I wasn't alone in my denial. A recent study by Stewart Barr, a geographer at the UK's University of Exeter, found that people who identified as committed environmentalists actually flew more than those who didn't. Some of these "bleeding-heart jet setters" insisted they'd earned their flights through green behavior at home. "People tell themselves they can justify a flight of 5,000 miles because they've recycled all year," Barr told me.

Yep, most of the environmentalist I know think nothing of taking a cross continental trip to scientific meeting and do so several times a year; in fact most consider it one of the perks of the job. But they will put their plastic water bottle in the plastic recycling bin, and look all smug about it.