It's been a few days since I put up an Obamacare Schadenfreude post, mostly because the news has slowed after the enrollment ended, and the VA and IRS scandals sucked all the oxygen out of the atmosphere, giving the administration time to formulate a new round of excuses.  But a few have come up, so having a few minutes to kill, here goes:


So when the health-care law went into effect, Settles acted quickly. In September, he offered health insurance to dozens of his employees to comply with the Affordable Care Act, which requires all but the smallest businesses to extend coverage to their full-time workers. He put in new systems to track employee hours and provide the data to the government. All this well before the employer mandate kicks in next year.

But unlike Settles’s other experiments, this one hasn’t been great for his business. He put raises and expansion plans on hold as he figured out the cost and logistics of making the changes. To his surprise, his employees have not leaped at the chance to get health insurance. And he is still trying to figure some things out — for example, how to safeguard employee information that must now be reported to the Internal Revenue Service, such as the Social Security numbers of children who are covered under their parents’ health plans.

“We don’t want to be liable for that,” he said. “What if we get hacked?”
In recent weeks, criticism of the Affordable Care Act’s employer mandate — one of the law’s most controversial components — has intensified, as employers such as Settles complain publicly and even some Obama administration allies acknowledge that the mandate has harmed some workers.

Don't worry, whenever anything goes wrong, the administration will blame it on the employers.


Fixing Obamacare, as opposed to repealing it, is all the rage these days, and there are no shortage of proposals out there to do so. But they don’t all come from the GOP. One measure from Health and Human Services currently making its way through the bureaucratic machine may wind up having Democrats doing battle with the Health Insurance Guru in Chief. In this proposed enhancement, insurance companies would be prohibited from selling fixed-benefit insurance plans as stand-alone policies.


A little-known proposed change to the president’s health care law could result in a new political nightmare for Democrats who are vulnerable in the 2014 midterm elections.
Vox.com says the Centers for Medicare and Medicaid Services (CMS) issued a proposal in March that would prohibit insurers from selling fixed-benefit insurance plans as stand-alone policies.
Fixed-benefit plans are so bare bones they don’t even qualify as actual health insurance under the Affordable Care Act’s individual mandate – so people who are covered by these plans only are still subject to the penalty unless they qualify for an exemption.

These sorts of plans, with low prices but fixed, limited benefits, are described as being most likely to be held by people looking for a supplement to an existing, lower coverage policy or those seeking a bridge remedy when they are between jobs. Not a panacea for most health insurance shoppers to be sure, but a useful tool to have available if you’re looking for some flexibility when money is tight.

No room for flexibility for the worker in these plans.  It's always Obama's way or the highway. 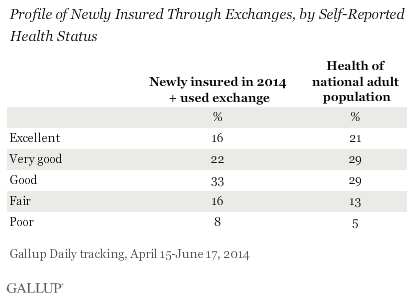 While those newly insured may be young, however, they are certainly not invincible.
“[T]he newly insured using exchanges in the April-June reporting period are less likely than those in the general population to report being in “very good” or “excellent” health,” Gallup reported. “Thirty-eight percent of those using an exchange for their new policies reported being in very good or excellent health, compared with 50% of the general population.”

Moreover, Gallup estimates that around 13 percent of the population of the United States remains uninsured. A new round of open enrollment, set to begin on November 15, already has administrators considering an increase in fines for those without minimum coverage requirements in order to boost ACA enrollment.

So much for using the young, healthy "invincibles" shoring up this exercise in socialism.
Posted by Fritz at 9:32 AM