The Daily Dose of Obamacare Schadenfreude

Another late start, another long post.  Yesterday was a "good" day for Obamacare Schadenfreude; lots of spin about the sudden increase in medical spending (along with a lackluster economic report) and continued questioning of the significance of the enrollment numbers. 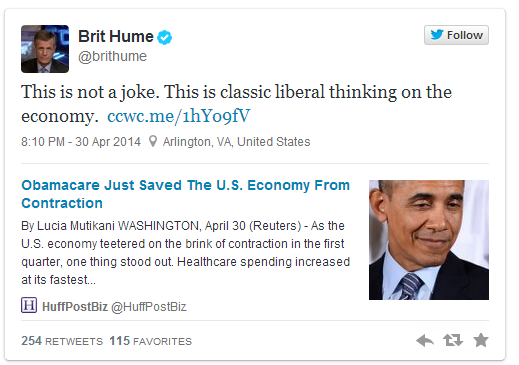 No, Obamacare Did Not “Save The Economy” Last Quarter


I’m old enough to remember when one of the major reasons to pass Obamacare was to reduce the percentage of the economy spent on health care, not increase it.

In fact, the White House economic team put out a massive paper in June of 2009 — entitled “The Economic Case For Health Reform ” — that focused on how Obamacare would grow the economy by slashing health care cost growth. Here are just a few fun selections from that report:

It goes on and on like that for 56 pages. The report even included a handy chart to show how lower — not higher — health care cost growth would boost the economy: 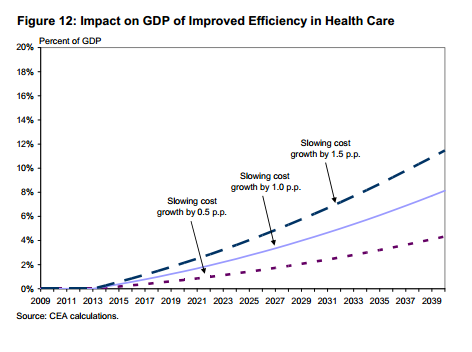 Why, it’s almost like one of Obamacare’s major stated goals was to reduce health care spending as a percentage of GDP, so that that money could be spent on more productive aspects of the economy! The president’s economists know this, which is why they put so much effort into pushing the meme that Obamacare would reduce health care costs.

Unfortunately, that’s not what’s happened. Despite numerous promises that Obamacare would “bend the cost curve downward,” health care costs have continued to increase. Given all the other blatantly broken promises about Obamacare (keeping your doctor, your health plan, etc.), though, it’s not exactly surprising.

At this point the Venn diagram of Obamacare Promises and Obamacare Results resembles two lonely circles, miles apart, never to meet. And in no way is that a good thing, no matter what the Obamacare Truthers say.

If spiking health-care spending is so great …


… shouldn’t the perception of ObamaCare be spiking right along with it? Prior to the implementation of ObamaCare, Barack Obama and Democrats claimed that the ACA would “bend the cost curve downward,” and then took credit for slowing rates of health-care spending increases in 2011 and 2012. Now, however, with health-care spending rising in 2014Q1 at its fastest rate since 1980 – and following a big jump in the fourth quarter of 2013, too — defenders of the law claim that increasing rates of spending are just splendid, because it means more people have access to health care.

What? They lied about their intentions?


The good news about health-care expenditures is that they’re propping up gross domestic product: Without soaring expenditure on health care, yesterday’s lackluster GDP estimates would have been negative, instead of a paltry 0.1 percent.

The bad news about health-care expenditures is that they’re, well, soaring: 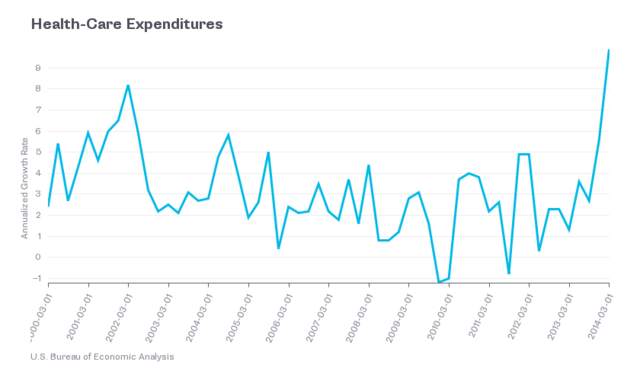 Of course, it’s not necessarily bad that we’re spending more on health care. As I’ve often noted, even though people complain about spending growth, we’re a really rich country. People like being able to go to the doctor, and now they can do more of that. And Obamacare was projected to increase the growth rate of spending this year.

After all the speculation that Obamacare might be bending the cost curve, we now know that so far, it isn’t. That doesn’t mean expanding coverage was a bad idea, of course. It just hasn’t turned out to be as cheap as some were hoping.

As the engineers like to say, "Faster, better, cheaper; pick two". Of course, in the case of the government, it's usual "Slower, worse, and more expensive; three for price of one."

Success! 2.45 Million Obamacare Enrollees Paid Their Premiums by April 15.
Remember the Obama administration’s much-touted statistic that 8.1 million Americans had signed up for Obamacare? Yeah, about that…


As of April 15, 2014, insurers informed the committee that only 2.45 million had paid their first month’s premium for coverage obtained through the federally facilitated marketplace.

If you have a statistic that seems artificially inflated for more than four weeks, consult your doctor immediately.


HHS has just released the latest enrollment report for the ObamaCare exchanges. A few notable statistics:
Let’s first focus on those last two bullet points. Sign-ups of the crucial 18-34-year-old cohort jumped from 25% in early March to 28% at the end of the enrollment period. That’s not a surprise given that young people are likely to be disporportionately represented among people who do things at the last minute. But the fact that over half of that age group chose their plan during the last month should worry ObamaCare supporters. People who are flakey enough to wait until the last minute are probably also flakey when it comes to paying premiums. Thus, that 28 percent number will decline and it will, of course, be no where near the 38 percent the Obama Administration says is needed to keep the risk pools stable. (FYI: The Kaiser Family Foundation says the low number of 18-34-year-olds doesn’t matter much. Seth Chandler says they are wrong.)
. . .
We’ve seen hints that the ObamaCare exchange risk pools are in trouble, from greater use of expensive prescription drugs, to hefty premiums increases coming for 2015. That, along with today’s enrollment report, means the exchanges are poised for a death spiral.

Carney: We dispute the GOP’s paid enrollment numbers for ObamaCare, and no, we don’t have any numbers of our own


. . .why would the Committee float a bombshell number that may very well turn out to be wrong? Could be it’s just their way of planting an extra seed of doubt in the public’s mind about O-Care: Even if the 67 percent figure is incorrect, it’ll stick in some voters’ minds. Seems awfully stupid, though, to give the White House a chance to say “I told you so” if the final payment rate ends up being much higher. By lowering public expectations to 67 percent, now the White House can spin an 80 percent rate as a “success” rather than the PR black eye that it is. (Twenty percent nonpayment would mean more than a million people would be tossed from the rolls.) I hope this doesn’t blow up in the Committee’s face.

Report: large employers could shift nearly all workers’ health coverage to marketplace by 2020

A new investor report predicts that Standard & Poor's 500 companies could shift 90 percent of their workforce from job-based health coverage to individual insurance sold on the nation's marketplaces by 2020.

If all U.S. companies with 50 or more employees followed suit, they could collectively save $3.25 trillion through 2025, according to the report by S&P Capital IQ, a division of McGraw Hill Financial.

I'm not sure if this is schadenfreude or not. Much of the problems with the healthcare system up until now has been because it evolved from an employee based system due to a historical accident (the wage controls imposed by FDR in WWII). Fixing some of those issues is warranted, but it seems to me the Obamacare is like cutting off the nose to take care of a zit. To wit:


With the Affordable Care Act, the government has dramatically expanded its authority as final arbiter over health insurance and consequently over access to medical care. After the law's Medicaid expansion and with the population aging into Medicare eligibility, the 107 million under Medicaid or Medicare in 2013 will skyrocket to 135 million five years later, growing far faster than the ranks of the privately insured.
. . .
The hidden truth is just around the corner—those more dependent on public insurance, mostly the poor and middle class, will have limited access to medical care. About one-third of primary-care physicians and one-fourth of specialists have already completely closed their practices to Medicaid patients. Over 52% of physicians have already limited the access that Medicare patients have to their practices, or are planning to, according to a 2012 survey by Merritt Hawkins for the Physicians Foundation. More doctors than ever already refuse Medicaid and Medicare due to inadequate payments for care, and that trend will only accelerate as government lowers reimbursements.
. . .
Meanwhile, concierge practices are increasing rapidly, as patients who can afford it, along with many top doctors, rush to avoid the problems of an increasingly restrictive health system. The American Academy of Private Physicians estimates that there are now about 4,400 concierge physicians, 30% more than last year. In a recent Merritt Hawkins survey, about 7% to 10% of physicians planned to transition to concierge or cash-only practices in the next one to three years. With doctors already spending 22% of their time on nonclinical paperwork, they will find more government intrusion under ObamaCare regulations taking even more time away from patient care.

With all the talk of equality of outcome, the obvious next move would be to close down concierge doctors and force everyone into the public healthcare system. But then, where would the elite go?
Posted by Fritz at 10:42 AM