Newton Residents Vote with their Pocketbooks

NEWTOWN, Conn.—The number of people seeking permits to buy guns has surged in this town following the December massacre of schoolchildren by a local man, even as the parents of some victims had urged stricter weapons laws nationwide.

Through July 24, more than 200 people in Newtown have received new local pistol permits, according to a review of local records, surpassing the 171 new permits issued for all of last year. Such permits are prerequisites for Connecticut permits that allow people to purchase and carry pistols as well as rifles or shotguns. 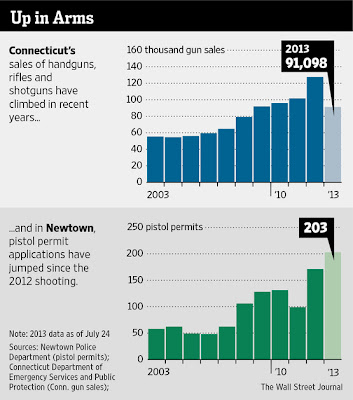 There's nothing quite like a real, honest threat to take something away from someone to make them appreciate the value of having it.  As Joni Mitchell said:

Don't it always seem to go
That you don't know what you've got
Til its gone
Posted by Fritz at 6:45 PM