Who is the new Dr Who girl?


A 25-year old soap opera actress beat hundreds of hopefuls to travel the universe alongside the Time Lord in one of the most sought after roles on British television.

Jenna-Louise Coleman was chosen to become the new companion of the 11th Doctor Who (Matt Smith) on the show of the same name, replacing Karen Gillan, who plays Amy Pond.

Best known for her roles in British soap Emmerdale and school drama Waterloo Road, Coleman will replace Gillan and her on-screen partner Rory Williams (Arthur Darvill) when they depart the series in a heart-breaking departure planned later this year.


I haven't followed Dr. Who for years.  It used to be great fun, laughing at the truly stupid plot lines, and the sets that couldn't have cost more than a quid or two, assuming they didn't just use junk that was lying around.  When I started on this project a few days ago, I found a site that had all the various incarnations of the Doctor and his various companions.  I was amazed at the number of Doctors that had passed by and the variety of the companions.

Executive Producer Steven Moffat said the storyline for Doctor Who this season will be full of thrills, adventures and big surprises as the show builds up to its 50th anniversary.

"Jenna is going to lead him his merriest dance yet. Who she's playing, how the Doctor meets her, and even where he finds her, are all part of one of the biggest mysteries the Time Lord ever encounters, Moffat said.

"Even by the Doctor's standards, this isn't your usual boy meets girl."

Viewers will have to wait until Christmas to meet Coleman's character, who is described by Moffat as being even more talkative than the current doctor. 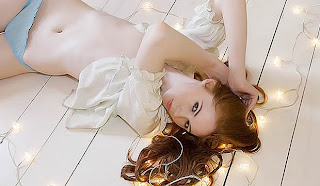 Jenna-Louise replaces Karen Gillian who played companion Amy Pond from 2010 to 2012.  I believe Karen was recently killed off in an episode of Eureka, but I've been unable to verify that...

UPDATE: Refuted.  The cute redhead on Eureka was Felicia Day. 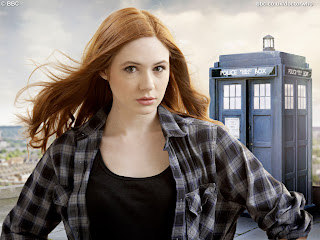 So, below are few of the other women who have traveled around the universe with the Doctor:

A ginger and a husky lover?  I like that.

And that only takes us back to the fifth incarnation of the Dr...

Ted combines his interests in guns and girls with Kari Wurher as Weekend Woman #44. Meanwhile, the DaleyGator has Natalia Velez, and their list of babe posts. William Teach at Pirate's Cove has this covered in the new "Sorta Blogless Sunday Pinup" and Rule 5 review.  Over at The Other McCain, Wombat Socho's Rule 5 Sunday done come on Monday this week.
Posted by Fritz at 6:00 AM