Horatio Chapple, 17, an aspiring medical student, was killed when the animal rampaged into the tent in which he and his friends were sleeping on a glacier in Svalbard, Norway. His friends, Patrick Flinders, 16, and Scott Smith, 17, were injured fighting off the bear, as were the expedition guides, Michael Reid, 29, and Andrew Ruck, 27.

Patrick is said to have punched the bear on the nose before it was shot dead by other members of the group. Horatio’s grandfather, Sir John Chapple, 80, was the head of the Army from 1989 to 1992, the former governor of Gibraltar and the former president of the British Schools Exploring Society, which organised the trip.

Horatio’s father, David, a spinal surgeon from Salisbury, Wilts, and his mother Susan, were too upset to comment. Edward Watson, the BSES chairman, said of Horatio: “By all accounts he would have made an excellent doctor.”

The 7ft, 40-stone bear rampaged through their tented camp, ignoring traps designed to keep it at bay. By the time it was shot, Horatio, was dead and Patrick, from Jersey, and Scott, along with their two guides, were seriously injured.

Police, who arrived by helicopter, found the group in shock, the bloody carcase of the bear still lying among the tents, the dead and the injured. 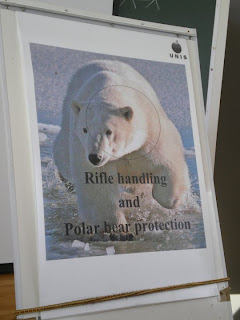 Svalbard, is the far northern archipelago that belongs to Norway.  This was also the home of the talking armored Polar Bears in the book and movie "Golden Compass".  In Svalbard it's illegal to go out of town without a gun due to the threat of Polar Bears.


Then came rifle training. As it is illegal to go out of town unarmed, we all had to learn how to handle the rifles. i've used smaller rifles and shotguns, but many in our group had never shot a firearm of any sort. We learned to half load, to shoot from three different positions, how to handle the flare gun, and where to aim on a polar bear. Guns are a last resort and ONLY for self defense.