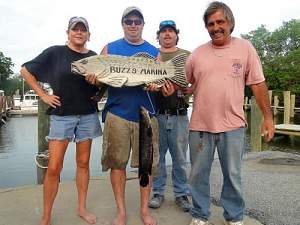 Some recreational fishermen at Buzz's Marina in St. Jerome's Creek shot what appears to be a large Northern Snakehead:

A couple of us were just messing around down at the dock and saw this thing swimming by. We couldn't tell what it was at first so one of the guys threw a rock at it which didn't bother it in the least. When we figured out what it was, it was in water too shallow to get a boat near so Michael shot it and then retrieved it with a kayak. St. Jerome's creek is not fed by any fresh water so there goes the theory that they won't leave the Potomac. We think she was up here to spawn being right at the head of the creek like this almost in the marsh. We will contact DNR in the morning and let them know as well. 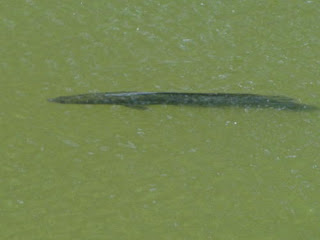 To date, it has been thought that the Northern Snakehead is a strictly freshwater fish with a low tolerance for salt water.  We hope this would limit it's rate of spread in the Bay region, by making it difficult to cross between major tributaries because of the high salinity at their mouths.  If they can live and move about at the salinities near Point Lookout, they can effectively move anywhere in the Maryland portion of the Bay with impunity.  I could be catching them at CCNPP soon.
Posted by Fritz at 9:45 PM