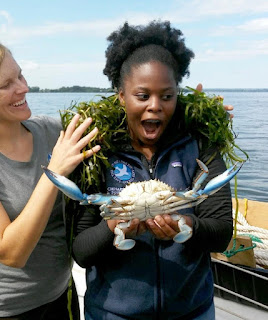 Some scientists think so. WaPoo, New challenge for Chesapeake Bay watermen: A shortage of crab sperm

In mid-May, the two state agencies that run the survey — the Maryland Department of Natural Resources and the Virginia Institute of Marine Science — made an announcement with more dire news. Only 227 million crabs had been counted, the lowest number on record since the survey began in 1990.

I don't believe they actually counted 227 million crabs; I'm pretty sure they sampled the population and estimated that 227 million (plus or minus a few tens of millions) crabs inhabited the bay.

The survey revealed a plunge in the number of female crabs, from 158 million in 2021 to 97 million this year. It also found a three-year continuation of a below-average number of juvenile crabs, estimated at 101 million.

“There were two big red flags,” said Allison Colden, Maryland senior fisheries scientist for the Chesapeake Bay Foundation. “The lowest abundance on record since the survey began and also that we have lower numbers now than when Maryland and Virginia requested and were granted a federal fisheries disaster declaration in 2008. It’s hard to believe that the population was higher then than it is now.” Then there was the decline in male crabs. With the count at only about 28 million, watermen will be limited to 15 bushels of males a day in August and September. In normal years, no more than 34 percent of the estimated male crab population is allowed to be harvested — a threshold so tough to surpass that only the harvest of females is usually monitored, ensuring that they continue to spawn.

Under the new restrictions, the harvest of females will continue to be limited — between nine and 17 bushels in July and August and 17 and 32 bushels in September and October.

Each female is capable of producing 3 million eggs in a brood, with up to three broods in a year, typically in mid- to late summer. They mate only once, releasing chemicals — akin to pheromones — into the water to attract a male. As the female sheds her shell, matures and hardens a new shell, the male protects her. In the process, she banks a cache of sperm that will last a lifetime. 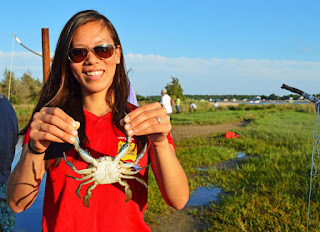 But scientists point to two studies that indicate a shortage of sperm in the crab population, possibly leading to lower numbers of juvenile crabs.

“The male numbers being very low — and consistently low — that’s where some of our research comes in,” said Matt Ogburn, who works at the Smithsonian Environmental Research Center in Anne Arundel County. “If there are relatively few males proportional to the number of females that are maturing and mating, those males mate more frequently, as frequently as every few days.”

The problem with that, Ogburn explained, is that male crabs need about a week to rebuild their sperm stores. If they mate sooner than that, they’re not providing females with as much sperm as they normally would. A supply that should last years might last only one season.

“It’s estimated that females not getting enough sperm might be leading to a 5 to 10 percent reduction in the total number of fertilized eggs,” Ogburn said. “For the females that survive to a second summer, the amount of larvae they can produce is reduced.” 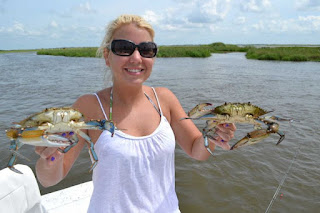 My understanding is that between natural and fishing mortality, it's extremely rare for a female crab to survive winter and produce a second clutch of eggs.

There’s a lot of other things that could be happening, too, researchers said, including:
The new restrictions are stressing an industry of watermen already beleaguered by strict visa requirements that have limited seasonal migrant workers at the region’s crab houses and soaring prices on many supplies, including gasoline and paint.

They've been talking about this "low sperm" effect since I was hanging around there. I'm glad to see they made something of all the crabs they killed for it.

The Wombat has Rule 5 Sunday: Archer/Summer Illya up and running at The Other McCain.
Posted by Fritz at 5:40 PM