Will Wind Power Kill the Whales? 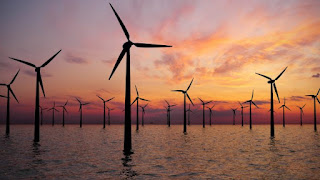 Maybe, from Bacon's Rebellion, Wind Farm Threat to Whales is Next Big Argument


The massive offshore wind (OSW) project proposed by Dominion Energy may pose a serious threat to the endangered North Atlantic Right Whale population. A comprehensive environmental impact assessment is required to determine the extent of this threat and the mitigation it might require. The same is true for the other proposed Mid-Atlantic OSW projects.

The North Atlantic Right Whale is reported to be the world’s most endangered large whale, with an estimated population of just a few hundred critters. They winter off of Florida and Georgia, but summer off New England. They migrate through the coastal waters off of Virginia twice a year, including that year’s baby whales. They can grow to over 50 feet in length and weigh more than 70 tons. Protecting them is a major challenge.

Phase one of the proposed Dominion OSW project will occupy 176 square miles. Phase two might bump that up to 350 or more square miles and the proposed federal lease areas for additional OSW are even greater; much greater in fact.

The obvious monster question is how will all this development affect the severely endangered Right Whale population? Answering this question must be central to the project’s required Environmental Impact Assessment (EIA) under NEPA, not yet complete and independent of the pending State Corporation Commission review. This is federal territory.

For example, will the whales enter and swim through the resulting maze of giant towers and whirling overhead blades? If not, then OSW might well prevent the migration. We first need to know just how these migrations work, in both directions. Is there a single path or many highly distributed paths? Are they taken by single whales or large groups? Do they quickly go straight through or is there a lot of wandering and feeding?

Then too, there is a great deal of northbound and southbound shipping in this area. The Northeast US and Canada supply, and are supplied by, many places and countries to the South. Being struck by ships is the leading cause of whale death. If the OSW arrays force the whales into the shipping lanes the impact could be devastating. Note that these huge OSW arrays are also an obstacle to commercial shipping, which might tend to concentrate the shipping, thereby increasing the threat of killing whales. 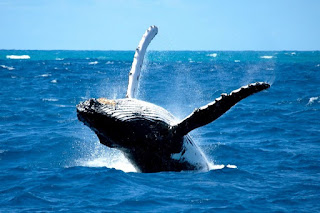 Then there is the noise issue. Whales communicate acoustically and there is an extensive literature on how human noise adversely impacts them. That wind arrays create a lot of noise is well established, with many states having noise limits for onshore wind.

So we need to know things like
It is conceivable that the noise might cause confusion, distress or even act like a great wall to the whales trying to migrate. Confusion alone could be dangerous to the baby whales. So the impact of noise should be a central part of the EIA.
There are other potential issues as well. For example, how might the huge OSW array affect the local food supply for the whales? What about the impact of construction, as compared to operation.

In addition to building and operating the huge OSW array itself, there may be issues with the power lines use to bring the juice ashore. These lines are collectively gigantic compared to even our biggest onshore power lines.

Low frequency noise is a problem from humans around wind generators and whales have extremely acute hearing, and water is a much better conductor of sound than air, so the issue of whether whales will be susceptible to the noise from wind generators is a very good question. However, whales routinely get hit by ships, which aren't exactly known for their stealth.