A Good Year for Oxygen in the Bay

Data collected by the Maryland Department of Natural Resources (DNR) and Old Dominion University show that dissolved oxygen conditions in the Chesapeake Bay mainstem of Maryland and Virginia were better than average in June 2022. The hypoxic water volume — waters with less than 2 mg/l oxygen — was 0.51 and 0.98 cubic miles during early and late June monitoring cruises, compared to historical early and late June averages (1985-2021) of 0.87 and 1.31 cubic miles.

During their respective time periods, the early June volume ranks as the 8th best on record and late June was 12th best. Additionally, a small volume of less than 0.1 cubic miles of anoxia – waters with less than 0.2 mg/l oxygen – was observed during the late June cruise. Hypoxia was essentially zero (0.0002 cubic miles) in May. 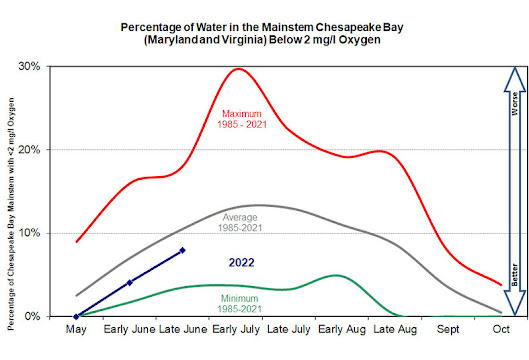 So, yeah, it may be a little lower than the long-term average, but not enormously. Whatever progress the Bay Diet has achieved, it appears to only have had a minimal effect of what is thought to be one of the Bays great problems, summertime hypoxia in the bottom water. For what it's worth, it's been a fairly mild year in the region, without the large freshets that set up the conditions for hypoxia. I don't think that Bay's problems will be even close to solved by the 2025 target date (not that I ever really expected them to be). So the good news is that the "Bay Industry" of federal, state and local governmental managers, NGO lobbyists, and private business that serve them will likely continue to be needed.