MD to Regulate Taking of Jimmies 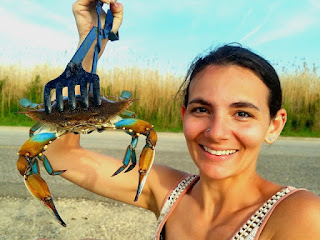 Which, in case you weren't aware, is Marylandese for male Blue Crabs, Da Sun, Maryland to restrict crabbing, including first-ever limits on harvest of males, in response to ‘worrisome’ population decline

This summer Maryland will impose new restrictions on crabbing in the Chesapeake Bay — including the first-ever limits on how many bushels of male blue crabs watermen can haul each day — in response to a troubling decline in the population of the beloved crustaceans.

Regulations issued this week, to be in effect starting in July, will limit commercial watermen to at most 15 bushels a day of male crabs in August and September and will end their harvest two weeks earlier than normal on Nov. 30. And the new rules will tighten existing restrictions on the commercial harvest of female crabs and the recreational harvest, too. 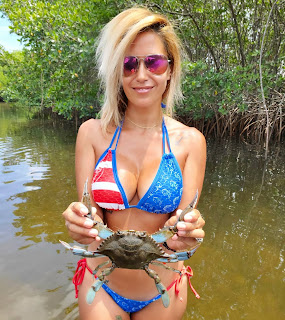 The changes come weeks after an annual survey of Chesapeake blue crabs found they number the fewest since scientists began tracking their population in the 1990s.

That state fishery managers moved to limit even the harvest of male crabs demonstrates the gravity of the situation. Limits are typically only imposed on female crabs as a means of ensuring enough of them survive to spawn, but with a more than 60% decline in the overall estimated blue crab population since 2019, scientists, environmentalists and representatives from the seafood industry are signaling that more protections are needed to help boost crab reproduction.

The Wombat has Late Night With Rule 5 Sunday: Hailey Outland up and gathering clicks at The Other McCain.
Posted by Fritz at 6:32 PM