Jennifer Lopez and Ben Affleck are still on cloud nine after their surprise wedding in Las Vegas.

The lovebirds celebrated, Page Six is told, with pizza and Diet Coke on a private jet back to LA in the early hours of Sunday.

And while J.Lo posted on her OnTheJLo newsletter Sunday that they were joined by their kids at the shock nuptials at a drive-through wedding chapel, Page Six is told that the only ones in attendance were Lopez’s child, Emme, 14, and Affleck’s Sera, 13.

They have five kids in total between them. Emme has a twin brother, Max, and Affleck also shares Violet, 16, and Sam, 10, with ex-wife Jennifer Garner.

The apple doesn't fall far from the tree: ‘Lick It. Spank It. Drop It’: The Weeknd And Johnny Depp’s Daughter Release A Raunchy New Series

Footage from the teaser trailer revealed a fast-paced, party-infused lifestyle that stems “from the sick and twisted minds” of co-creators Sam Levinson and Abel Tesfaye, and the narrator reiterates the tone this racy new series will take.

Women  can be so cruel: Fitness Influencer Emily Skye Was Praised For Her Bikini Photos—Until She Got "Fit Again" And Lost Her Post-Pregnancy Weight


"When I was pregnant & postpartum & was carrying a bit of extra 'padding', people used to celebrate the fact I was confident & comfortable enough in my own body to wear a bikini," she wrote. "Now that I’m fit again & have lost what I’d gained during pregnancy, people say things like 'why do you have to wear a bikini?' 'mums shouldn’t show their bodies like this' or 'you love yourself!'. DAMN STRAIGHT I LOVE MYSELF - it took me long enough to!⁣⁣"

"Doesn't society tell us to love ourselves? But if we do we’re told we shouldn’t," she continued. "I love my body in all shapes & sizes & at all stages of my pregnancy & postpartum journey. I’m so grateful for it!"

She says she's the happiest "with the way I am now." Emily is proud of being "strong, fit, healthy," and she loves how she looks today. "I work hard to be this way & it makes me happy," she said.


Kylie Jenner is facing major backlash from social media users for boasting about her and boyfriend Travis Scott’s private jets and using hers to take short flights.

The Twitter account @CelebJets posted Jenner’s plane route after she flew from Camarillo, Calif., to Van Nuys, Calif., last Tuesday, estimating that the trip would take only three minutes as opposed to a 45-minute drive.

The page later clarified that the total flight time ended up being 17 minutes.

While the Twitter feed normally lists the pounds of jet fuel used, the cost of fuel and the tons of CO2 emissions, it did not do so for Jenner’s jaunt.

Three days after the quick flight, the reality star, 24, posted a black-and-white photo of her and Scott, 31, posing in front of their private jets. “you wanna take mine or yours ?” she boldly captioned the Instagram post Friday. 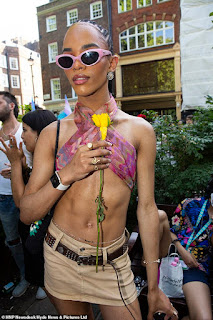 Recently cast Doctor Who actress Yasmin Finney has confirmed that her character in the long-running British sci-fi show’s 14th series will be, like herself, a transgender woman.

Finney revealed her character’s transgender identity during a recent appearance at the July 9th London Trans+ Pride event in the eponymous English capital.

Addressing a crowd of attendees, as seen in a video shared by Pink News, Finney began, “I love this so much.”

“This is my first London Trans Pride ever,” she explained. “I feel so connected to my community more than ever and if the government is trying to eradicate us, like, we’re all here and we’re just duplicating Look at how many of us there are. Like, hello, [outgoing UK Prime Minister Boris Johnson. Bye!”

The Wombat has Rule 5 Sunday: Marine LeCourt up on time and under budget.