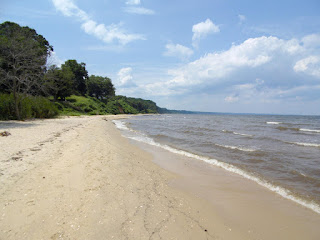 We've been avoiding the beach since we got home; it's been beastly hot and humid lately, so Skye and I mostly move from shade tree to shade tree on the streets for our daily outing. A storm and a "cold" front last night brought the temperature down to 85 today, so we gave it a shot, and survived. 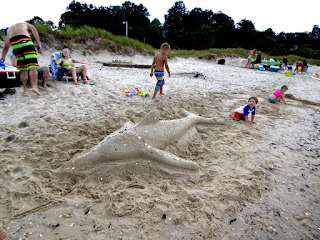 Easily the most elaborate sand sculpture of the year so far. 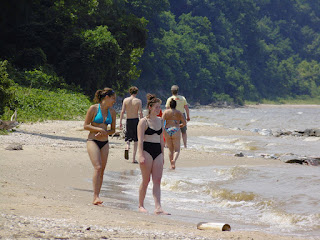 We had a pretty good crowd at the beach today. Skye got her requisite pets and oohs and ahhs. 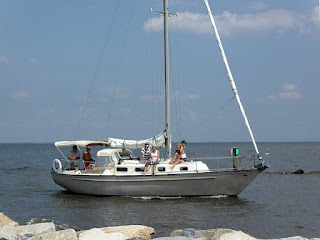 We had a stiff north wind following the front, so it was a good sailing day 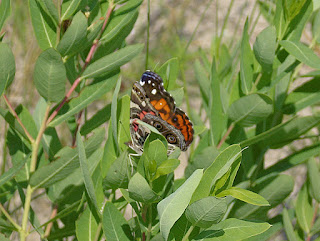 An American Lady, in the weed du jour, Dogbane which grows in the dunes.


Apocynum cannabinum (dogbane, amy root, hemp dogbane, prairie dogbane, Indian hemp, rheumatism root, or wild cotton) is a perennial herbaceous plant that grows throughout much of North America - in the southern half of Canada and throughout the United States. It is a poisonous plant: Apocynum means "poisonous to dogs". All parts of the plant are poisonous and can cause cardiac arrest if ingested. The cannabinum in the scientific name and the common names hemp dogbane and Indian hemp refer to its similarity to Cannabis as a fiber plant (see Hemp), rather than as a source of a psychoactive drug (see Cannabis (drug))

Although dogbane is poisonous to livestock, it likely got its name from its resemblance to a European species of the same name.

A very strong and good quality fiber obtained from the bark is a flax substitute that does not shrink and retains its strength in water. It is used for making clothes, twine, bags, linen, paper, etc. The plant yields a latex which is a possible source of rubber. Apocynum cannabinum was used as a source of fiber by Native Americans, to make hunting nets, fishing lines, clothing, and twine. It is called qéemu [qǽːmu] in Nez Perce and [taxʷɨ́s] in Sahaptin. The Concow tribe call the plant pö (Konkow language). 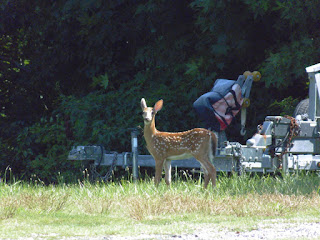 Saw some spots passing through the boat yard.