A Fustercluck of Obamacare Schadenfreude

Chuck Schumer Admits Obama Health Payments Violated The Constitution. But kind of surreptitiously. Like the constitution even matters anymore. 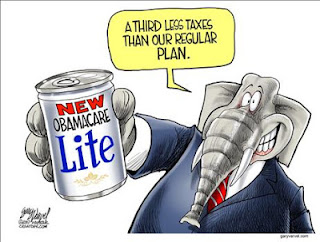 John McCain’s Medical Problems Are Mitch McConnell’s Political Woes McConnell Delays Health-Care Vote As McCain Recovers From Surgery  You don't really need that part of your brain. Yes, they needed his vote, but they needed more than that. Maybe a spine transplant.

Not that it matters for now, but Why the Cruz amendment is smart policy


The Cruz amendment -- which has been inserted into the GOP Senate health plan -- is smart, because it doesn't take anything away from anyone. If you want Obamacare -- you can have it. You can have the coverage for the 10 "essential benefits,‎" you can have the subsidies and the exchanges that were supposed to save $2,500 per family. It's still there for you.

The Cruz‎ amendment creates what is called a "Consumer Freedom Option." This essentially allows an "off-ramp" from Obamacare for the tens of millions of Americans who don't want it. The "Consumer Freedom Option" allows insurers who offer Obamacare-compliant plans to offer a range of much less costly plans. In other words, it empowers people and families to pick and choose what they want in their own insurance package. Some families want and can afford blanket coverage that insures them for everything from cancer to contraceptives to drug addiction to dental care to the sniffles. If you want to pay for that coverage, go for it. ‎ 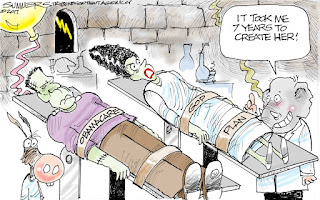 What about families or individuals with lower incomes or healthy life styles that want the other extreme? They want slimmed-down coverage that protects them from major medical expenses -- a bad injury like breaking a leg, or a serious disease with costly ongoing treatments. ‎These families may voluntarily choose to pay for more routine medical expenses, like a checkup or a visit to the dentist's office, out of pocket. One benefit is that since more people will pay directly for medical services, they are likely to shop around for the best price, and this competition will lower prices for everyone.

In other words, the Cruz amendment is pro-choice -- which I thought was one of the anthems of liberalism. Cruz told me that he believes that based on the preliminary numbers that this approach could save tens of millions of Americans as much as 30% on their health costs. That's thousands of dollars of savings per family.

But is it The tweak that could cost Mike Lee's vote and sink the healthcare bill? Apparently so: 2 more GOP senators oppose health bill, killing it for now. Lee was one of the two. Rand Paul: Republican Health Care Bill ‘Keeps the Fundamental Flaw of Obamacare’ aka the mandate.  Health care bill collapse leaves divided GOP at crossroads 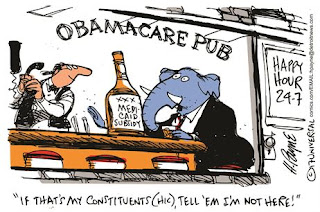 
If we are to subsidize health insurance, why not food? Or water? Or housing? You may respond, yes, but we already do that. You are right we have subsidized, for the poor, food and housing, but we didn’t, until now, attempt to subsidize a market item for all.
With this bill, Senate Republicans declare they have overcome Hayek’s protestations about the pretense of knowledge — the idea that no central planner can know enough to engineer an economy successfully.
With this bill, Senate Republicans declare they have the knowledge to determine and correct prices for millions of Americans who purchase health insurance. Pretense? You bet it is. 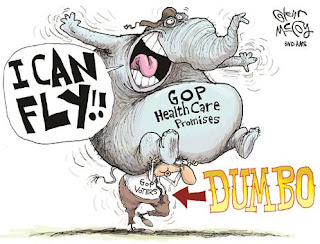 Markets are incredibly complex interactions between millions of people in a nearly simultaneous bazaar of trading. No one man or woman possesses that knowledge, so anyone who sets or attempts to set prices for health insurance is doomed to fail.
And mark my words, this Senate Healthcare bill will fail just as its twin Obamacare has, for they suffer from the same pretense of knowledge. No one is smart enough to plan even the simplest of marketplace prices — no matter how much data is available.

Entitlements are just as addicting for politicians of either party as they are for their beneficiaries — a fact Democrats have been counting on for generations.

McConnell To Push Repeal Only After Collapse Of Healthcare Bill

The Republican never miss another opportunity to miss an opportunity. Party of Fail: Senate Pulls Plug on Obamacare "Repeal". Obamacare Survives Thanks to Republican Moral Narcissism. The best has become the enemy of the good.


So, it's true that a more engaged and informed president may have helped along the process more than Trump has, but it's also true that at the end of the day, Trump is going to sign anything Republicans can get through Congress and he will boast that it is a major win and the greatest piece of legislation in galactic history. The chaos we're seeing, thus, goes way beyond Trump.

Trump blindsided by implosion of GOP health care bill If so, he needs to examine his expectations of his colleagues in Congress. 'We'll let Obamacare fail!' Trump says replacing insurance law will be easier once chaos erupts because 'the Democrats are going to come to us' When inaction becomes action?

Via Wombat-socho's "in The Mailbox: 7.17.17", the estimable Megan McArdle point outs Taxing Hospitals Is a Lousy Way to Fix Health Care. You tax things you want less of, not more of.
Posted by Fritz at 2:28 PM