My goodness, one day, and the bin is mostly full again. Let's start with the usually perceptive Megan McArdle, brought to us as usual by Wombat-socho in "In The Mailbox: 07.18.17": Congress Achieves Bipartisan Failure on Obamacare:


On both a political and a policy level, this choice is sensible, even though it leaves Republicans in a tough place. The exchanges in many states have been troubled for years, and those troubles will now deepen as insurers wonder what the heck Obamacare is going to look like in a year or two. The only saving grace for Republicans is that if and when those exchanges fall into a deep decline, they will still be able to assign some of the blame to Democrats for their original sin in passing Obamacare. 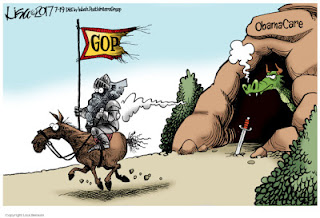 This should also give pause to Democrats who want to cheer “Obamacare is saved!” Obamacare is now in worse shape than ever. And Obamacare was not exactly in good shape before. Obamacare was, in fact, wheezing and sweat-soaked every time it had to walk from the couch to the fridge.

Time has not been kind to its individual market provisions, and now even more regulatory uncertainty surrounds the program. While Republicans deserve some of the blame for this state of affairs, Democrats cannot evade a much fuller measure of responsibility, because most of the program’s problems are congenital, not lifestyle-induced. 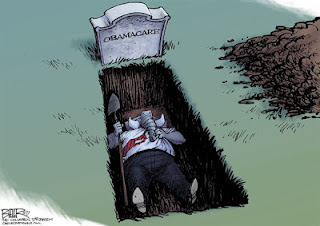 He also brings us Powerlines:  The Senate Repeal & Replace Fiasco

Senate GOP, White House Point Fingers After ObamaCare Repeal Collapse, Of course. As long as they have fingers, they'll point them. Democrats Will Soon Regret That Republicans Failed To Repeal ObamaCare. Nah, It's not like they care about actual results, it's just about how it sounds.  “It’s An Insane Process”: How Trump And Republicans Failed On Their Health-Care Bill. The Senate has insanity built into the process. Byron York: No surprise: On Obamacare, GOP senators don't do what they don't want to do. Rush On Health-Care Implosion: The Senate Is Now Being Run By Three Female Leftists. That may be a little strong. But just a little. 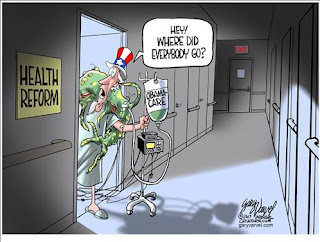 There is one other maneuver left and I’m far from the only person to bring it up. Mitch McConnell can pull the last supports out from under the bridge and go full nuclear. Get rid of the sixty vote requirement for any and all legislation. And then just repeal Obamacare (you can still put an end date on it of six months or a year or two if you really wish) and be done with it. It’s not as if the legislation doesn’t already exist. In an era where we’ve grown used to bills which are longer than an encyclopedia, this March Mo Brooks submitted a bill that was exactly one sentence long.


“Effective as of Dec. 31, 2017, the Patient Protection and Affordable Care Act is repealed, and the provisions of law amended or repealed by such Act are restored or revived as if such Act had not been enacted,” 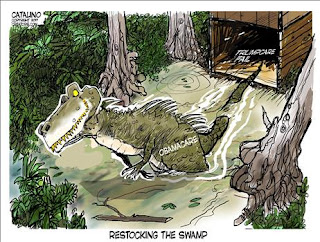 So what happens after that? It’s pretty much Armageddon. The media will sell the public on the idea of the GOP no longer simply pushing Granny off the cliff in her wheelchair, but actually burning her at the stake. The GOP will probably lose a massive number of seats in Congress next year and Trump would more than likely wind up being a one term president. But there would be a couple of other possible effects as well. For one thing, the GOP would have kept its promise. And for another, even if some of the “goodies” from Obamacare went away, insurance premium costs might start coming back down as competition increased and more options became available. That might not seem so bad after a while. 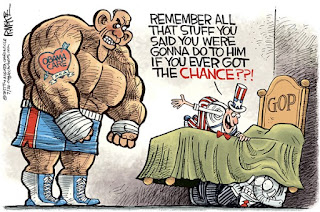 Hmmm.  From today's "In The Mailbox: 07.19.17", Don Surber argues that Trump can kill it with his pen and phone: Trump can dump Obamacare. Or there is the "let it die" option:  After Deciding to 'Just Let Obamacare Fail,' Trump Again Lobbying for Healthcare Bill.  Flogging a dead ass, Trump to Senate: Cancel Your August Recess and Get Obamacare Repeal Done. 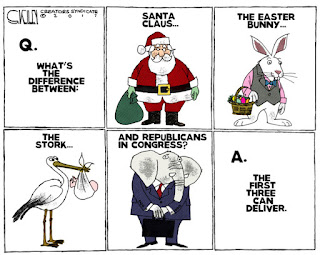 Too late for now, but worth remembering next time: HHS analysis finds Cruz amendment lowers premiums, boosts enrollment. But as you might expect, the CBO estimate on Obamacare repeal projects 27 million people to "lose coverage" by 2020. Of course, the CBO projection of how many people Obamacare would enroll have never even been close. They do predict it would cut deficits by $476 billion between now and 2026. A worthy goal.