Reason #5618 That Trump Was Elected


Even as gas prices have fallen to the lowest point in years under President Trump, Senate Minority Leader is claiming the price of petrol has only gone up.

The nationwide price for gas closed the week of July 17th at $2:39/gallon, down from $2.47/gallon when Trump took office.

Over the July 4th holiday weekend, gas prices were at their lowest point since 2005, according to the AAA.

"At $2.23, today’s average national gas price is the cheapest the country has seen all year," AAA reported. "On the week, gas prices fell in 46 states. Only Illinois, Oklahoma and Washington, D.C. saw prices increase, albeit by one cent each, while Hawaii and Maine remained flat. South Carolina continues to carry the cheapest gas in the country at $1.90. Today, consumers can find gas for $2.00 or less at one out of every four gas stations in the country."

Chuck Schumer, appearing on This Week with George Stephanopoulos, claimed Sunday the prices are only rising, thanks to "huge companies buying up other big companies."

"Gas prices are sticky -- you know, when the domestic price goes, uh, when the, uh, price for oil goes up on the markets, it goes right up but it never goes down.," Schumer said. "How the heck did we let Exxon and Mobil merge?"

Schumer also appeared confused over the "sticky prices" economic theory, as gasoline is cited by the Federal Reserve as an example of prices that aren't "sticky." 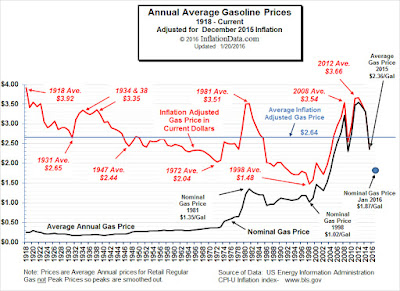 “It isn't so much that liberals are ignorant. It's just that they know so many things that aren't so.” - Ronald Reagan

Have you kissed a fracker today?
Posted by Fritz at 9:00 AM