I Learned Some History Today

A story about how Capt. John Smith marked the limits of his exploration of the Chesapeake Bay with brass Maltese Crosses, or crosses cut into tree bark:  Cap'n Jack charted the Chesapeake -- but where are his crosses?

It was a tantalizing find, a possible solution to a four-century-old mystery, and it sent a shiver of excitement through the small band of obsessive amateur historians who continue to search for artifacts from Captain John Smith's legendary voyages of exploration of the Chesapeake Bay in 1608.

The discovery, in June 2010, by Maryland archaeologist Darrin Lowery, on Mockhorn Island, a marshy expanse on the Atlantic side of Virginia's Eastern Shore, was a small, metal Maltese cross.

Lowery, who has turned up more than 700 ancient artifacts in his extensive fieldwork, was immediately intrigued when a colleague literally stepped on the cross at low tide. The object caught his eye because it resembled the Maltese design of the 27 crosses that Smith depicted on the famous map of the bay he made to mark the high points of his explorations.

Smith wrote in his journal and histories that he carved crosses into trees and nailed up brass versions of the cross "to signify to any that Englishmen had been there." In effect, he was stamping the area "Property of England."

It turned out to be a false alarm; the cross wasn't old enough to be one of Smith's. 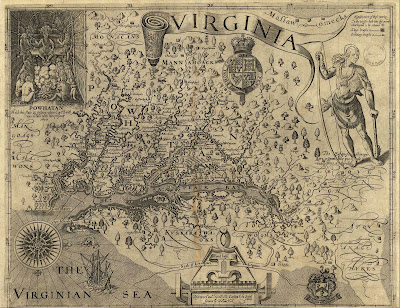 A modern version with the Bay turned to the now traditional "North up" orientation. I have to say, Capt. Smith really got around. 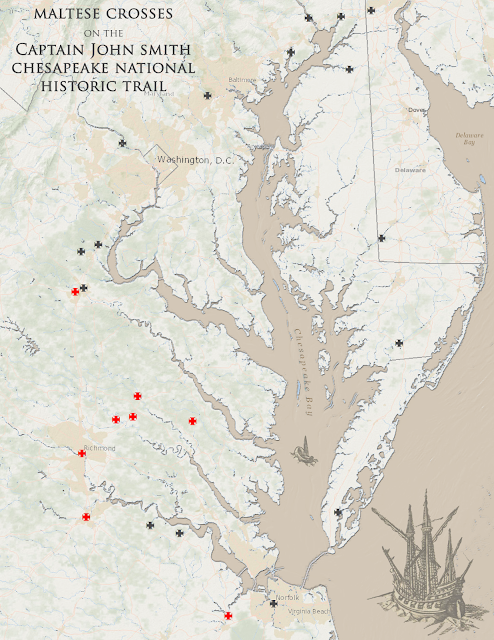 The Chesapeake Bay conservancy is erecting stone markers close to where they believe Smith's markers to be. Red crosses show where stone markers have been placed.